X-Road: The digital backbone of Estonia

After Marzouki's statements, a Tunisian court opens an investigation

Authorities in the digital model state of Estonia exchange data via the X-Road infrastructure. The software is now also being tested in Germany.

In Estonia, practically every contact with the state is digital, from dialing to the tax return to the parking ticket Purchase. Behind these services is X-Road, the infrastructure for digital communication between authorities and citizens. Together with standards and laws, Estonia’s software forms the digital backbone.

The digital state: What can we learn from Estonia?

Estonia is considered a digital model country. The small Baltic country is known for its density of startups, enables virtually all administrative procedures online and also offers these services to its worldwide e-residents. Our author Helen Bielawa currently lives in Estonia and researches innovations in the public sector. In this series of articles she shows what is behind Estonia’s image and what Germany can learn from it.

In 1991 Estonia Declared its independence from the Soviet Union after 51 years – the beginning of a radical system change. At the end of the 1990s, the inventors of X-Road laid the foundation for Estonia’s development into a model example for the digital state. One of them is Uuno Vallner. From 1993 to 2001 he worked as a consultant for the information systems department in the Ministry of Economic Affairs.

“We built our management system from scratch,” recalls Vallner. A central problem emerged: Exchanging data between authorities was expensive. The requirements of the data protection authority made the processes complicated.

We built our management system from scratch.

A safe and above all cheap solution was needed. “We had no money for cable networks,” says Vallner. “So we decided that data is king. A king would not build his own road when he was traveling, but put a protection team at his side. We wanted to send data over the Internet and protect it with software. ”

The new one should be safe, simple and open-source Be infrastructure. These properties determined the design.

The core of X-Road are individual keys. Every authority, every citizen, every company has a digital twin, a unique ID. Two of these parties can exchange data within X-Road via two security servers without having to use the server of a third party.

There are no duplicate data records in the X-Road system, this is prohibited by law. Anyone who uses X-Road compiles the desired data set via inquiries to the respective authorities.

“So each authority only knows part of the data. The health department knows the health data, the population register the residents, the traffic authority the traffic data, ”explains Vallner. Before, the same data sets were held by different authorities – not efficient.

Citizens can see who is using their data for what. With your ID you can log into an online portal and view your data. Errors are more likely to be noticed and reported. Transparency and efficiency go hand in hand.

Open Source: A matter of course or risk?

“I wrote in the requirements that this solution must be open source so that everyone can review it,” says Uuno Valler. But this was not only met with approval. “We had some discussions with security officers.”

I wrote in the requirements that this solution must be open source.

So the situation arose that X-Road was legally open source from the start, but practically not. Experts received the code on request. It was only published on GitHub in 2016 under the MIT open source license.

Entry of the banks gave the breakthrough

The infrastructure is also open to private companies. For example, one of the first important partners for X-Road was the banks. By 2006, only three percent of citizens had used online services to communicate with authorities. Then the two most important banks in Estonia switched from pin codes to digital identification.

Within three Years ago, the share of use rose to almost 40 percent. Today 99 percent of all contacts with authorities in Estonia are done online.

Finland and Estonia have been developing the software together since 2013. Four years later, the two countries founded the Nordic Institute for Interoperability Solutions. Since then, the organization has taken care of the further development and organizes the work of the X-Road community, which is now active worldwide. 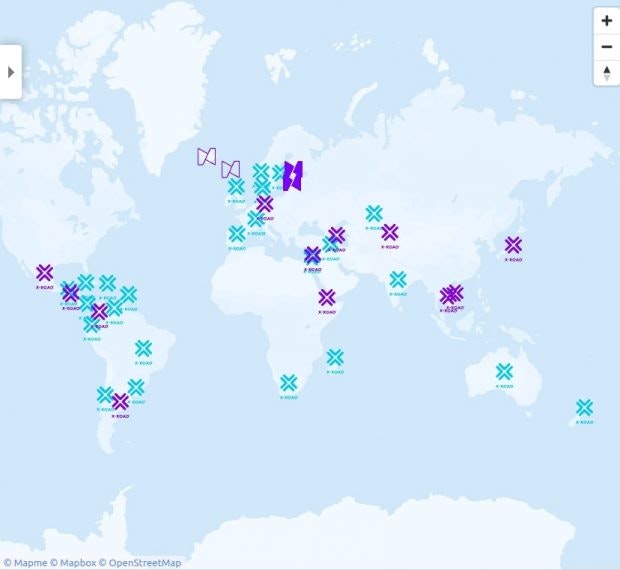 Authorities around the world have now recognized the potential of X-Road. (Screenshot from https://x-road.global/xroad-world-map)

On the world map of the community you can see that X-Road is now used internationally. In 2016, Faroe Islands and El Salvador became the first countries outside of Estonia and Finland to implement X-Road. Today Azerbaijan, Australia, Scotland, Chile and South Africa belong to it, and the WHO wants to use X-Road for digital vaccination certificates.

There is also a marker on the X-Road map in Germany : The Association of Statutory Health Insurance Physicians in Hesse started a pilot project for video consultation hours and digital prescriptions in April 2020. One of the IT service providers involved is the Estonian company Nortal.

In Estonia, Nortal has several state-owned e-services developed. The software developer has also been active in Germany since 2018. In an interview with t3n.de, CEO Ole Behrens-Carlsson and Head of Digital Healthcare Taavi Einaste emphasize how valuable experience from other countries and also from the private sector can be for digitization in Germany.

In Estonia connects X-Road authorities, citizens and companies – in Hessen, patients, doctors and pharmacies. Does the infrastructure also function as an isolated solution in the health sector, without the nationwide context? Yes, say Einaste and Behrens-Carlsson.

You can imagine federal Germany like many small Estonia.

“You can imagine federal Germany like many small Estonia. In theory, hundreds of X-Road s work together, ”explains Behrens-Carlsson. But the system is also compatible with other infrastructures, such as the telematics infrastructure.

“X-Road has a very German quality”

According to Einaste, X-Road offers exactly the elements that an infrastructure needs, if so sensitive Data on how health data should be exchanged: It enables the simple, honest and secure exchange of data and regulates the key question of who has access to which data.

In addition, X-Road offers a “very German quality, as it were,” adds Einaste. A digital certificate that is valid in court is automatically created for every data request. This is what German authorities need for legally secure communication.

Einaste remembers conversations with stakeholders in Germany that exactly therefore prefer to use the fax – to have a valid document. Because X-Road automates this process, the system is so compatible with the German context.

Digitization is not a magic solution

The infrastructure is therefore well suited to transferring existing processes to digital. But in the case of digital prescriptions, more was needed. The exact pipeline through which data is sent and the role of hospitals, pharmacies and patients in it had to be defined. Instead of digitizing the state of affairs, a new process was created.

“Digitization does not mean from one piece of paper make a PDF. This means that the chance of a real transformation is lost, ”says Taavi Einaste. His German colleague Ole Behrens-Carlsson comes across this mindset again and again in his work with authorities.

Digitization does not mean turning a paper into a PDF.

“Politicians think X-Road could solve their problems. But X-Road does not magically connect two authorities, it requires development work, ”says Einaste. Who has which rights, which actors exchange which data? Only when the answers to these questions have been found can X-Road come into play. Therefore, at the beginning of a technical change, there must be a new mindset. Most read

Adrian Ovalle
Adrian is working as the Editor at World Weekly News. He tries to provide our readers with the fastest news from all around the world before anywhere else.
Previous articleHome office, office, coworking space: Spotify is launching flexible working models
Next articleWhy copper has long been a technology investment