Mass shooting at Walmart in Virginia live updates: 16-year-old among the victims

With the Sonos Roam, the Homesound specialist has a really portable one Speakers launched. The manufacturer has achieved better Bluetooth integration than with the Speaker Move.

The Sonos Roam is now the second attempt by a Bluetooth speaker from the company: The first, the Sonos Move (test) , but still had a few software-related weaknesses that the manufacturer has corrected in its new model. In addition, the Roam with is just under 180 euros cheaper, far more compact and also a lot lighter and therefore better suited for on the go. The Roam is not completely perfect, but one after the other.

Roam is the smallest Sonos speaker to date 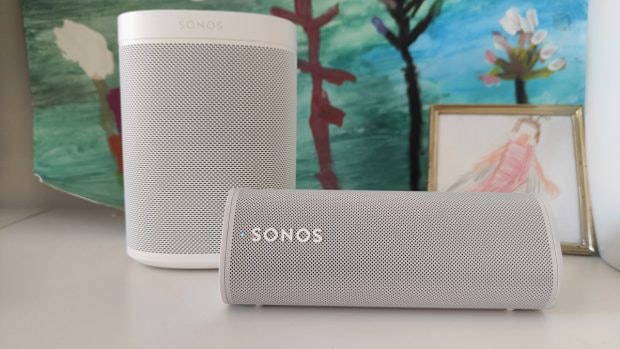 The small Roam weighs 430 grams and, at 168 x 62 x 60 millimeters, is roughly the size of a UE boom speaker. So it should fit easily in every backpack or shoulder bag. With the Bluetooth speaker Sonos Move, which weighs three kilograms, you would have had to lug around a separate bag. So that it can also be used in the shower or at the quarry pond, it is certified according to protection class IP67. This means that it can not only survive a shower, but also half an hour at a depth of one meter in fresh water. A swim in the sea is not recommended, as the salt water attacks the seals.

Visually, the Roam blends seamlessly into the current portfolio with its perforated front. The usual Sonos controls and a button to mute the microphone are located on the rubberized top. Sonos has not done without voice control via Alexa or Google Assistant with its cheapest speaker. However, as with the other Sonos speakers, you have to decide which one you want to use, because the parallel operation of the two language assistants is probably not supported for licensing reasons.

In addition, the voice assistants are not permanently available in battery mode. 30 minutes after the music has stopped playing, the Roam is put into standby mode, which also puts voice control to sleep. If the voice assistants were constantly listening, it would have a negative impact on the running time. The reactivation takes place either by opening the Sonos app or the power button.

The latter is rubberized and protrudes slightly from the back of the case, but not so far that it could be accidentally operated in the luggage. The USB-C port is positioned right next to it, with which the Roam can be charged to 50 percent in about an hour. It’s not fast, but it is enough. Practical: the speaker can also be charged wirelessly from the underside. The Roam is compatible with all Qi wireless charging stations, and Sonos also offers its own wireless charging solution that costs 50 euros and is supposed to charge the speaker to 50 percent within two hours. The Sonos charging station is adapted to the shape of the Roam and sticks slightly magnetically so that you can also use the dock when the speaker is in landscape format. The test confirms the slow charging power, which logically increases further when the speaker is in use and consumes additional power.

With regard to the running time, Sonos speaks of up to ten hours of continuous playback, which is also achievable depending on the volume. The promised standby time of up to ten days is calculated a bit too optimistically – a week is more realistic, which is also perfectly fine. 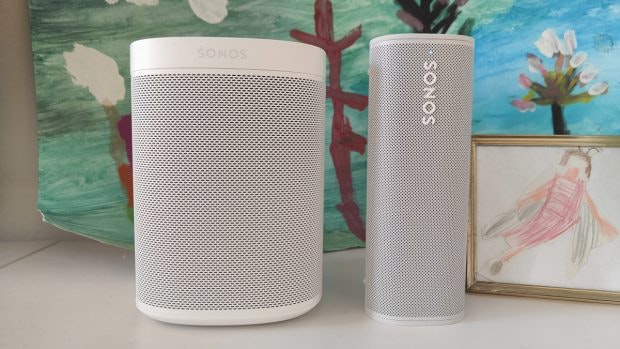 With sound swap you can share the music from the roam with the Sonos One at the touch of a button. (Photo: t3n)

As usual for Sonos, the Roam is set up absolutely smoothly – this requires the S2 app released last year and a WLAN connection, as is necessary for all current Sonos speakers. After setup, even experienced Sonos owners should not ignore the product tour, but wipe it through from start to finish, as it contains some relevant information on use.

In addition to the procedure for Bluetooth pairing and voice control, it also explains how the new functions Sound Swap (“transferring content”) and ” Group audio ”can be used. These features enable content to be transferred from the roam to another Sonos speaker at home and vice versa. With the group function you can – as the name suggests – integrate the speaker into a loudspeaker group and play music on several devices at the same time. This can also be done via the app, but it is faster by pressing the power button.

As shown in the pictures, the Roam must always be in close proximity to the corresponding Sonos device for these functions. The whole thing actually works smoothly and shows that Sonos is continuously developing its products in a meaningful way.

It should be mentioned that the swap function only works with more recent Sonos speakers such as the Sonos One, One SL, the Five and Arc like Beam. Older models such as the Play 1 and Play 3 are not supported even if they are connected to the new S2 app.

How sounds the Sonos Roam?

Let’s get to the most important Matter: the sound of the roam. Two class H amplifiers as well as an adapted racetrack mid-range speaker and a tweeter are built into the speaker. For its compact size, the speaker combination sounds typically Sonos balanced en, clear and powerful. The mids are powerful, and the Roam delivers bass that is audible despite its compactness. Because of its comparatively small volume, it certainly cannot match the bass of a Move or other larger Bluetooth speaker, but it is sufficient for the small roaring cube.

Another positive thing to be emphasized is the fact that the speaker makes no effort to distort even at a higher volume level. The Roam does not come close to the volume of a move – due to its size, it should not be understood as a party speaker, but as a relaxed background.

Like a Sonos Move or One, two roam speakers can be linked to form a stereo pair to create a more spacious sound. However, this is only possible when using WLAN; this function is not supported in Bluetooth mode. Sonos does not give a reason for the missing feature, speakers from other manufacturers such as the just under 70 euros expensive UE-Wonderboom 2 can be coupled to a stereo pair.

If you don’t like the preset sound, you can use the equalizer in the Sonos app to improve it. In addition, the Roam supports the Auto-Trueplay introduced with the Move, with which the sound of the speaker is automatically adapted to the room conditions. The Trueplay function is performed every time the speaker is moved.

Sonos Roam supports Bluetooth and WLAN at the same time

In contrast to the Sonos Move, the new small speaker supports the simultaneous Bluetooth and WLAN connection. This makes it possible to stream music to the Roam via Bluetooth and to integrate other Sonos speakers as a group via WLAN. All grouped speakers then play the contents of the roam. 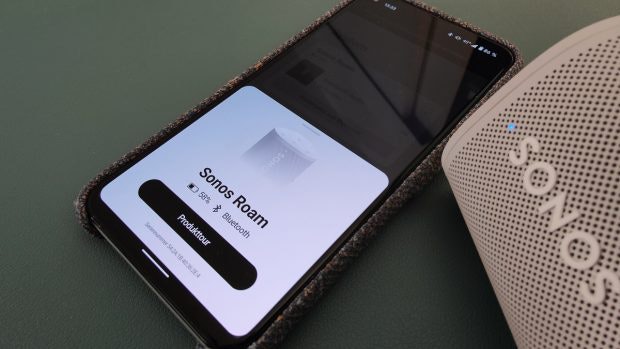 The Sonos Roam supports Bluetooth and WLAN at the same time – the Move couldn’t. (Photo: t3n)

This function can primarily be used in your own home. On the go, the most convenient type of playback is only via a Bluetooth connection, even if a WiFi network such as an Airbnb is available. Setting up a new WiFi network is possible, but still a bit cumbersome. Sonos could make improvements here so that the Roam can also be controlled more easily in new WiFi networks than it is currently using the Sonos app. You can delete or manage multiple WLAN connections in the Sonos app under “Network”.

In addition to playback via Bluetooth, the Roam also supports the Airplay 2 interface from Apple. This allows iPhone owners, for example, to stream content to the small speaker. The control reacts more slowly than via Bluetooth, but this is due to the interface and not to the speaker.

More on the subject: Sonos Arc in the test: New, smart classy soundbar – with a problem

Conclusion on Sonos Roam: Good addition to the Sonos system

We think Sonos’ second Bluetooth speaker is better than the Move. The Move sounds better due to its volume, but a Bluetooth speaker should not only be designed for the terrace or for transport in the car. With its more compact design and lower weight, the new model absolutely meets these requirements. Despite the lower volume, the Roam delivers a very good sound that can convince both at home in smaller rooms, but also on the go. 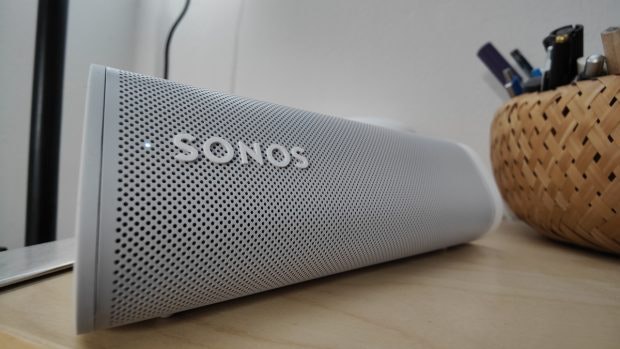 We consider the Roam to be a practical addition to the Sonos ecosystem, especially because of its smart functions such as sound swap, which should be exciting for owners of a Sonos system. Thanks to its easy portability and size, it can be set up anywhere in the apartment and also provides the right soundtrack for picnics in the park or outdoor fitness. Its price of just under 180 euros is not low, especially since other manufacturers are right Offer good bluetooth speakers for less. Thanks to its extensive package of partly smart functions and the connection to the Sonos system with over 100 supported streaming services, it is worth the money.

The Sonos Roam can be pre-ordered and should be available from April 20th. It is offered in the colors Shadow Black (black) and Lunar White (white). Sonos’ own magnetic, wireless charging station is not part of the scope of delivery, but costs an additional 49 euros.

Sandra Loyd
Sandra is the Reporter working for World Weekly News. She loves to learn about the latest news from all around the world and share it with our readers.
Previous articleElectric MG Cyberster includes cockpit for games and 5G technology
Next article2.3 billion euros: record fine against Alibaba