World Weekly News
HomeTechnologyNvidia no longer wants to talk to gamers, and for good reason
Technology

Nvidia no longer wants to talk to gamers, and for good reason

Surely many were waiting for the first presentation of this year’s GPU Technology Conference, the President and CEO of Nvidia, which would reveal what the next step in graphics is, what parameters and technological innovations characterize the development that replaces the current RTX generation. Many also expected the announcement of new RTX 30 video cards, but in the end something completely different happened.

“ I am AI “- with this percussive and at the same time player slogan, the nearly 2-hour online presentation began, and then perhaps in the minds of some it may have become clear that here and now Jensen Huang is not about fulfilling the players’ dreams. gives a lecture, and it is unlikely that he will pick up a new top-of-the-line VGA from the stove again. , what they see and why Nvidia’s first man talks about technologies like e.g. artificial intelligence, machine learning, data center infrastructure, cloud and supercomputers. Although these concepts are not new at all in the life of the company, for years there has been a kind of change of direction that focuses the company’s resources on the growing field of data processing and distribution.

This time the corresponding emphasis has been placed on graphics controllers. , and the company itself represented the roots with a kind of brief historical review of exactly where the history of GPUs started from and what milestones the history of GPUs grew.

One or two up-to-date visual demonstrations were also screened, mainly demonstrated the ray-tracing imaging method with more or less success. However, this has been the subject of the present, which will lay the foundations for the future not only of the company but also of certain industries.

The operation of the entire production line can be simulated using Omniverse.

The first shock to the audience was felt at the presentation of Omniverse’s multi-GPU simulation and collaboration platform, especially with a joint demonstration with BMW. The digital imaging and real-time simulation of one of the automaker’s production lines, along with the operation of the robotic units, has been very effective. The so-called The term “digital twins” has hit many ears, which simply means that real design, production and creation processes can be easily created in digital form at any time, which is especially useful in measuring efficiency and productivity, and the platform nature ensures accessibility at the enterprise level. .

This isn’t a very gamer video card, is it? 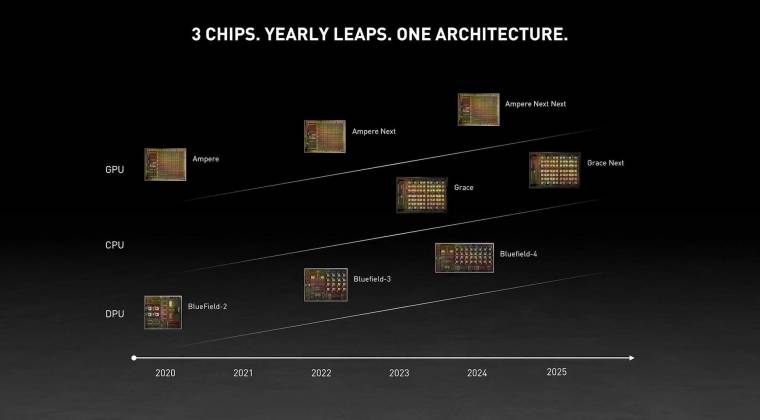 Absolutely not, although Nvidia regularly emphasizes that RTX technologies can be used to create projects based on visual and general-purpose computing. An interesting duality characterizes the GeForce Now service in the life of the company, not surprisingly, the outside world sees only gaming experiences and recreational opportunities in it, but in Nvidia’s mind it is a data center development that provides the game as a service; not interesting about the hardware, the GPU, the driver, you just need to connect and use, play as much as possible.

There was no more talk about it, the focus shifted to the exponential growth of data center needs, we could see new network accelerators, a quantum computing platform, a superchip for self-driving vehicles, a supercomputer project, and Grace, the company’s first server specifically for servers.

The first image of the Grace processor, which is of course based on Arm-architecture cores

After an hour and a half, several feelings could swirl in those who followed the very concentrated and sometimes deep levels of technology. reaching a lecture. On the one hand, the gamer community was left in the lurch, but perhaps that was to be expected somewhere, as GTC was never about bombarding the curious crowd with video card and game announcements. On the other hand, presumably many did not really understand what they saw during the presentation. Anyone who is stuck in the era of “GeForce vs. Radeon” and otherwise “GeForce is better because the driver!” Is now looking a bit for the cornerstones of brand loyalty because he has strayed into areas foreign to his favorite brand.

Well, the thing is, it’s about much more than just trying, looking for ways. Perhaps for the first time, Nvidia has shown the audience how they envision the future and where developments in recent years and the present are taking the group further. The corporate roadmap has expanded, with GPUs and CPUs arriving alongside GPUs, all kneading into the server market to form an ecosystem that other market participants don’t look at with any good eyes at all. A good example of this is Pat Gelsinger, who is returning to Intel and taking over as CEO, who has reacted in the usual cynical style to Nvidia’s announcements, which he thinks will be followed by the Santa Clara company, and of course this follow-up is not accidental.

Sandra Loyd
Sandra is the Reporter working for World Weekly News. She loves to learn about the latest news from all around the world and share it with our readers.
Previous articleThe United Nations condemns the Houthis' attempts to target Saudi Arabia
Next articleOops! That's the starting salary for IT