After noticing Ashok Jillot’s “wall” in an interview with NDTV, Congress responded

The Ingenuity helicopter drone is supposed to explore Mars from the air. This is the first color photo of the small aircraft.

Nasa has, admittedly, already published better photos of the surface of Mars. Still, the picture is interesting because it is the first color photo taken by the Ingenuity helicopter drone. The photo was taken on April 3, 2021 after the drone was deposited on the surface by the Mars vehicle Perseverance. 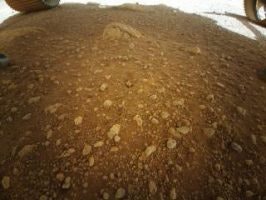 The first photo of the Ingenuity drone. (Photo: NASA / JPL-Caltech)

The Ingenuity drone will be the first aircraft to perform a controlled flight on another planet. As NASA announced on April 5, the drone, which weighs only around 1.8 kilograms, survived its first night on the Martian soil without any problems.

“We now have confirmation that we have the right insulation, the right heating and enough energy in his battery to survive the cold night, which is a great asset for the team” says MiMi Aung, head of Ingenuity. In the evening it can get up to minus 90 degrees cold at the landing site of the drone.

Ingenuity: This is the mission goal

The Ingenuity mission is planned by NASA as a technology demonstration. Flight tests are to be carried out in the thin Martian atmosphere. The whole mission is supposed to take 30 days in Mars. For the first few days, however, the drone remains on the ground to collect important environmental data. According to the current state of planning, Ingenuity will then take to the air for the first time on April 11th.

The Mars rover Perseverance and the Ingenuity drone landed on Mars on February 18, 2021 at 9:56 p.m. Perseverance has since completed several test drives on Mars and sent some photos of them back to Earth. Ingenuity should soon be able to add more and for the first time be able to provide us with images from the air.

Also interesting: Mission Mars: Why everyone wants to go to the Red Planet

Sandra Loyd
Sandra is the Reporter working for World Weekly News. She loves to learn about the latest news from all around the world and share it with our readers.
Previous articleVideo: Cupra Born electric completes tests at 30º negative for its debut in May
Next articleShortly before the IPO: Coinbase announces quarterly figures