The recordings of the landing of the Mars rover Perseverance are impressive. But one or the other may have wondered what the irregular pattern of the parachute is all about. Reddit users have now solved the puzzle.

2021 is a good year for space fans – on February 18th, Perseverance landed on Mars, before the Al-Amal probe of the United Arab Emirates successfully entered the Martian atmosphere. And China’s Tianwen-1 probe is already orbiting the red planet; In a few weeks a rover is also expected to land on the surface of Mars. The missions are primarily intended to provide scientific knowledge and answers – for example, whether there are traces of past life on Mars. Experience has shown that questions are also raised: for example, about the strange, irregular stripe pattern of Perseverance’s brake parachute.

That NASA uses striped braking parachutes is nothing new. That was already evident at the splashdown of the Apollo landing capsules. The reason for this is less the appearance than the fact that with patterned parachutes it is easier to see whether they have twisted or only partially opened. 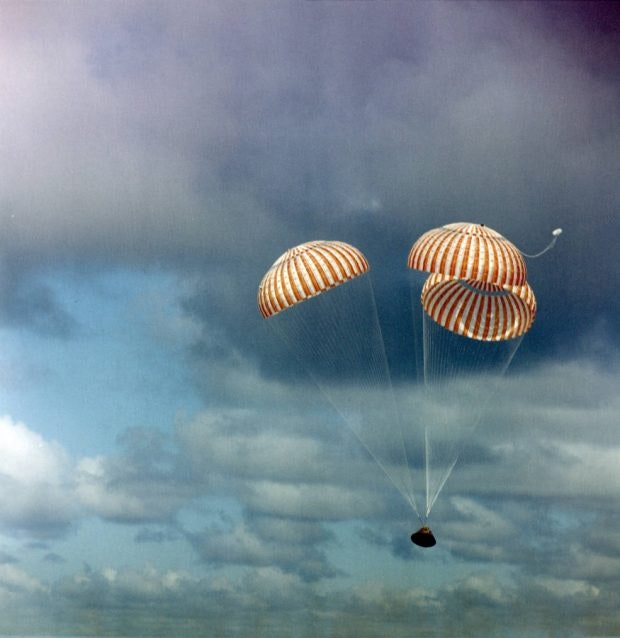 The command module of Apollo 14 shortly before the splashdown in the ocean. The striped braking parachutes are easy to see. (Photo: Nasa)

However, this does not explain the irregular line pattern of perseverances Braking parachute. What’s behind it? Nasa itself gave the impetus to solve the riddle: during the live stream about the landing, an employee said that sometimes messages were left at work that others should then find. Numerous enthusiasts did not have to say that twice.

Mars: What the Perseverance rover and its helper drone Ingenuity will do in the next few months

“There is a kind of hidden message or a secret message in the parachute of Perseverance Code? ”Someone asks on Reddit. And the solution is not long in coming. If the design of the parachute is based on a binary system – red is 1, white is 0 – and looking at the four “rings” of the parachute separately, the result is a code whose decoded message is “Dare mighty things”. “Dare to do great things” – NASA’s motto. The fourth ring is not a word, by the way, but indicates the geo-coordinates of the Jet Propulsion Laboratory (JPL), where the majority of the rover was developed.

redditor, / u / rdtwt1, put together a python script for the solve

I added some comments and a diagram to explain what the code https://t.co/w67mRey5Bl pic.twitter.com/ulUdtX5Uco

This is what Mars sounds like: Nasa releases video of Rover Perseverance

Not the first Nasa Easter egg

The encrypted message is by no means the first Easter egg that NASA has integrated into its missions – nor is it the first or only one with regard to the Rover Perseverance. The vehicle is equipped with various objects and references which, according to NASA, “range from functional to decorative”. Including the names of almost eleven million people who signed up for it, as well as a commemorative plaque referring to the corona pandemic and the perseverance of employees in the health sector.

With all its love for gimmicks and Easter eggs, NASA must always maintain the balance between what is necessary and what is nice. After all, the space on such a rover or space shuttle is limited. That should actually be the reason why Perseverance’s predecessor Curiosity stopped singing “Happy Birthday” for itself: The answer seemed “pretty cold and callous,” Nasa employee Florence Tan told The Atlantic. “We don’t get any scientific benefit from the rover playing music or singing ‘Happy Birthday’.” In such cases, science wins the battle between music and science.

Sandra Loyd
Sandra is the Reporter working for World Weekly News. She loves to learn about the latest news from all around the world and share it with our readers.
Previous articleStudy: More people online – problems in the education system
Next articleMercedes presents the C-Class in both variants