World Weekly News
HomeTechnologyIt's getting colorful: iMac with a 24-inch display with a completely new...
Technology

It's getting colorful: iMac with a 24-inch display with a completely new design and an M1 chip is presented

Apple has introduced a completely redesigned iMac. The new generation of the all-in-one computer is based on the M1 chip, is thinner than ever and comes in bright colors.

As previously speculated, Apple has unveiled a new iMac. The 24-inch model replaces the 21.5 iMac. The only 11.5 millimeter thin all-in-one computer was developed around the M1 chip, according to Apple.

iMac with 24 inches with 4.5K display and whisper-quiet 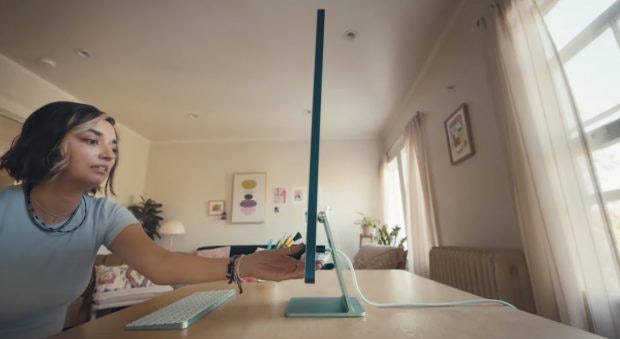 The 24-inch display has a resolution of 4.5K (4,480 x 2,520 pixels at 218 ppi) and has narrower bezels around most of the edges. The chin below the screen is still quite large, but thanks to the more compact design it should only be slightly larger than the 21.5-inch model. The back of the iMac is now flat instead of curved – according to Apple, the volume has been reduced by over 50 percent. The screen also has Apple’s True Tone technology for automatic adjustment of the color temperature, is 500 nits bright and supports the P3 color space.

Above of the display, Apple has integrated a new camera that is supposed to deliver better image quality. It no longer resolves with 720p as before, but with 1080p, so that you can be seen in video calls in higher resolution. The sound quality has also been improved: three microphones are integrated for recording, while Apple has integrated six loudspeakers for sound output, which, thanks to Dolby Atmos support, are supposed to create a spatial sound. Despite the thin design, Apple promises that the two small fans will be barely audible and that the device will still be cooler than its predecessors with their large cooling. 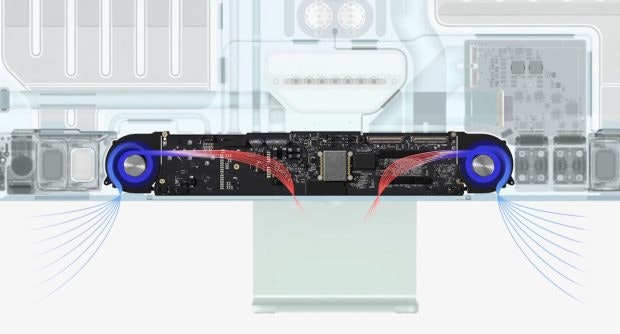 The cooling of the new iMac 24 has been massively reduced compared to its predecessor. (Screenshot: t3n)

For the power supply, Apple has integrated a new magnetic connector that is based on the Magsafe connector on the Macbook . Additional connections on the higher-end model include four USB-C ports, two of which offer Thunderbolt support. 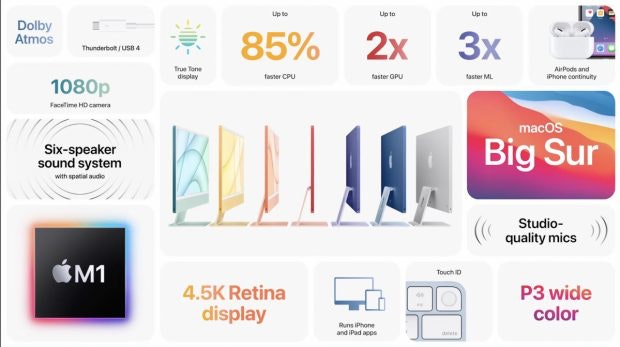 As already mentioned, the new iMac has the M1 chip with eight cores, the one already was announced in November 2020 and fired the first devices. In the new all-in-one computer, the chip should deliver up to 85 percent faster CPU and up to 2x better GPU performance than the predecessor in the basic configuration.

In addition to the iMac, Apple has presented matching accessories: A new Bluetooth keyboard, mouse and trackpad in matching colors. The keyboard has a Touch ID fingerprint sensor for logging in and paying with Apple Pay.

The new iMacs come in seven different colors and multiple configurations. The cheapest model costs from 1,449 euros and has eight gigabytes of RAM, a 256 gigabyte SDD and two USB 4 ports. The more expensive models cost 1,669 and 1,899 euros respectively and have two Thunderbolt / USB 4 ports and two USB 3 ports as well as Gigabit Ethernet. Both more expensive models have the keyboard with Touch ID in the scope of delivery and only differ in the SD memory, which is 256 or 512 gigabytes in size. As build-to-order options, the iMac can be equipped with up to 16 gigabytes of RAM and an nTerabyte of SSD storage. The cheapest model comes without Ethernet and with a simple Magic keyboard, the GPU only has seven instead of eight cores. According to Apple, they can be ordered from April 30th and should be available in the course of May. The 27-inch iMacs with Intel CPU will continue to be offered for the time being.

What Apple has presented:

Derrick Santistevan
Derrick is the Researcher at World Weekly News. He tries to find the latest things going around in our world and share it with our readers.
Previous articleNew Apple TV 4K comes with more power and innovative color matching
Next articleApple: New iPad Pro comes with an M1 chip, XDR display, Thunderbolt and 5G