Against the shortage: Hyundai is planning to develop its own chips

The third Stromer from Audi has been unveiled as a production model : The E-Tron GT, which is being launched as an RS version at the same time, starts at 100,000 euros. In a sense, the Porsche Taycan serves as the basis.

A little over two years after the presentation of the E- Tron GT Concept, the production version of the four-door Grand Tourismo from the Ingolstadt-based car manufacturer is ready. It should come onto the market with two models as early as the spring of 2021.

Audi E-Tron GT: Sportstromer with a pinch of Taycan

Audi describes his third Stromer as a sporty touring car with high driving dynamics. In contrast to the first electric car models such as the E-Tron and the Sportback variant, it is basically the group’s first “real” Stromer, as the GT model is no longer based on a heavily modified version of the modular longitudinal construction kit (MLB evo), the was developed for combustion engines. Instead, Audi relies on the J1 platform, which Porsche also uses for its Taycan (test). It has been specially developed for more sporty electric vehicles. 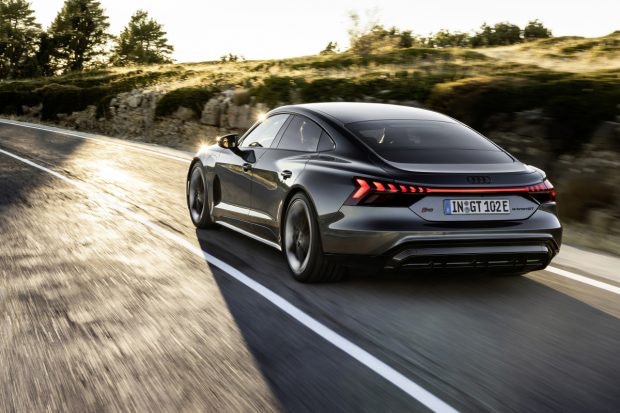 The E-Tron GT not only shares the electric platform with the Taycan, but also other elements such as the drive technology, the structure of the battery and the turbocharging technology. Based on its close relationship with the Taycan, the E-Ton GT can be clearly categorized as a sporty vehicle, whose Quattro drive delivers an output of 350 kilowatts (476 hp) or 440 kilowatts (598 hp) to the asphalt, depending on the model. The E-Tron GT Quattro accelerates from 0 to 100 kilometers per hour in 4.1 seconds, the RS model in just 3.3 seconds (both in boost). The maximum speed is 245 and 250 kilometers per hour (limited). Nevertheless, the range does not fall by the wayside, according to Audi: The E-Tron GT can manage up to 488 kilometers (according to WLTP, forecast) with its 85 kilowatt-hour battery.

Using the GT’s 800-volt technology, fast DC charging with up to 270 kilowatts of power is possible, provided that the Charging station allows. According to Audi, the E-Tron GT can be recharged within 5 minutes with full charging power for 100 kilometers. The charging process from five to 80 percent SoC (State of Charge) takes, according to the car manufacturer, “under ideal conditions, less than 23 minutes”. As standard, the vehicle supports charging with eleven kilowatts via alternating current – shortly after the market launch, a charger for 22 kilowatts of power will follow.

In Europe, Audi customers get access to their own Charging service E-Tron Charging Service, which comprises around 200,000 public charging points. Audi customers pay a uniform tariff nationwide in 26 countries, explains the group.

With its large wheels of up to 21 inches, the wide track, the flat silhouette and the long wheelbase, the GT can be recognized as a sports car. Its dimensions are 4.99 x 1.96 x 1.41 meters. According to Audi, the relatively low drag coefficient of 0.24 ensures high efficiency and a long range.

The interior of the Audi E-Tron GT: Focus on the driver

The interior of the E-Tron GT is heavily focused on the driver: The central dashboard and the 10.1-inch display are inclined slightly to the left. The cockpit’s 12.3-inch display stands free in the room, while the MMI touch monitor is embedded in a black piano lacquer panel. The third generation of the modular infotainment system 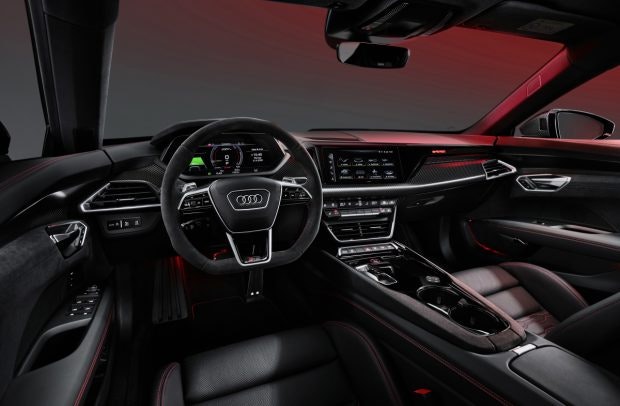 Audi E-Tron GT from the inside. (Photo: Audi)

As is customary for a vehicle of this type, the driver and front passenger sit low and sporty. The seats are separated from each other by a wide center console. In the E-Tron GT you don’t sit on leather, but on a combination of synthetic leather and the fabric Kaskade or a mix of synthetic leather with the microfiber material Dinamica, explains Audi. With both options, the car manufacturer relies on recycled materials such as polyester fibers from old plastic bottles and textiles or fiber scraps from selvedges. If you can’t do without leather, there are leather packages in different colors to choose from.

As a further operating option, voice control is of course available. Optionally, a head-up display can project important information onto the windshield.

The E-Tron GT is also fully networked: a total of eleven invisible antennas for audio, LTE, Bluetooth and GPS signals are to connect the Stromer with the outside world. Among other things, many functions can be controlled via the My Audi app on a smartphone. The standard equipment includes the “Audi Pre Sense Front” and “Audi Pre Sense Basic” safety systems, as well as the lane departure warning. The optional systems are subdivided into the packages “Tour”, “City” and “Parking”, whereby the assistance package “Plus” combines all of them.

The E-Tron GT is produced in the Audi factory in the Böllinger Höfe in Neckarsulm, which was converted for the model for a good year. During the manufacturing process, the manufacturer makes sure that the Gran Turismo is produced in a CO2-neutral manner. Approximately 100 percent of the electricity used should come from renewable sources, the same applies to the heating energy supplied by a biogas-operated combined heat and power unit.

The basic price of the E-Tron GT Quattro in Germany is 99,800 euros. The RS E-Tron GT Quattro variant only starts at € 138,200. Audi sees the RS model as “the dynamic spearhead of electromobility at Audi”. In addition to the more powerful engines, it differs from the normal GT through a high-tech chassis with features such as three-chamber air suspension, all-wheel steering (option) and regulated rear axle differential lock.

WorldWeeklyNews
Previous articleCrash Bandicoot 4 for Nintendo Switch seems to be more than just a port: this graphical comparison proves it
Next articleSeamless shopping: Shopify integrates Shop Pay with Facebook