Global Health: Europe may witness 700,000 deaths from corona by spring

On Tuesday, Microsoft presented a new solution for the so-called K-8 area. In the USA, this includes all schools that teach children up to about 14 years of age. The Redmond manufacturer now wants to convince the students, but also the schools themselves, of particularly inexpensive laptops on which Windows 11 SE will be installed. Microsoft is thus directly attacking Google and its Chromebooks, which are very popular in American schools mainly because of their low entry costs.

With Windows 11 SE, the manufacturer is adopting the concept of the previously attempted Windows 10 S again, but avoids old mistakes. The problem with Windows 10 S was that users were limited to apps from the Microsoft Store. This turned out to be particularly unacceptable for schools. The devices stayed like lead on the shelves.

Windows 11 SE takes a different approach. The Windows edition for schools goes in the direction that Microsoft originally took with the now discontinued Windows 10X. Windows 11 SE should only be available on new low-cost devices and only for schools and educational institutions. Although Windows 11 SE is optimized for Microsoft Edge, Office, and Microsoft’s cloud-based services, it’s not just limited to Microsoft apps.

“Windows 11 SE also supports third-party apps, including Zoom and Chrome, because we want schools to choose what works best for them,” writes Paige Johnson, director of education marketing at Microsoft in a blog post. IT administrators can decide for themselves which apps are installed. The devices could also be configured so that they update automatically outside of class hours.

Microsoft intends to have closely coordinated the specific changes introduced by Windows 11 SE with teachers and students over the past 18 months. Their feedback is said to have led to some serious simplifications. Apps under Windows 11 SE are always started in full screen mode. The flexible snap layouts have been cut. Only two apps can be run side by side under SE.

The new widgets area of ​​Windows 11 is available in Neither does SE. According to the manufacturer, it would be too distracting in a classroom setting. Microsoft Edge will accept Chrome extensions as standard under SE. This must be switched on separately under Windows 11. With this aggressive approach to Chrome extensions, Microsoft is clearly targeting Chromebook users. Because anyone who has ever used a Chromebook knows that very little is possible without extensions. With Windows 11 SE, previous Chromebook users would be able to switch almost seamlessly. Files are not saved in Google Drive, but in the OneDrive. 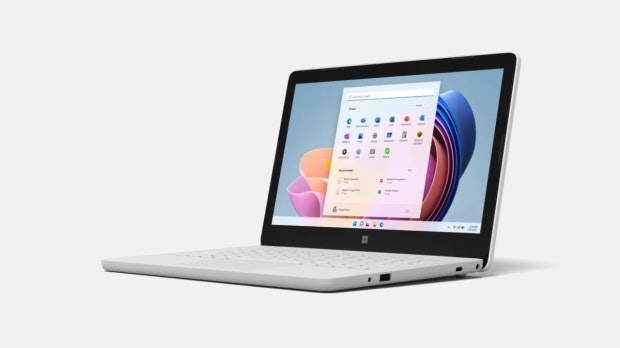 The manufacturer has streamlined the entire design, the selection of preinstalled apps is tight. Windows 11 SE will only be available as a pre-installation on inexpensive laptops that are to be sold in schools. Well-known brands such as Acer, Asus, Dell, Fujitsu, HP and Lenovo have announced that they will be offering laptops with Windows 11 SE in the coming months. Microsoft itself also wants to offer the Surface Laptop SE for 249 US dollars. Four gigabytes of RAM and 64 gigabytes of permanent storage seem to be the desired ideal configuration for Windows 11 SE.

By the way, Windows should 11 SE shouldn’t be an abbreviation according to Microsoft. Something like “Student Edition” or “School Edition” would have been conceivable. Microsoft has created the connection to Intune for administrators. The devices can be administered with a simplified backend management console.

Microsoft also bundles apps such as Teams, Office , Onenote, Minecraft for Education and Flipgrid with Windows 11 SE. This should make it easier for students to use a Windows 11 SE laptop. The program, along with laptops, is initially limited to the US education system. It is unclear whether and when the lean operating system will make it to Germany.

Sandra Loyd
Sandra is the Reporter working for World Weekly News. She loves to learn about the latest news from all around the world and share it with our readers.
Previous article[Chronicle] 27º Manga Barcelona
Next articleAnonymous hijacks Attila Hildmann's website – and discovers a leak at its provider

Juniper Research: The automotive industry has sniffed up such an insane amount of sensors