We drive the efficient and urban Mercedes B-Class 250e

European-American statement: We are concerned about Iran's violation of the nuclear agreement

The evolution of plug-in hybrid technology is something that has helped to make performance compatible with efficiency, a field where Mercedes has achieved a good compromise, as is the case with the Mercedes B-Class 250e.

This entry-level model from Mercedes, alongside the Classe A, has a 1.3-liter four-cylinder petrol engine combined with a 75 kW electric motor, which also serves as a starter for the combustion engine, allowing to achieve a combined power of 218 hp (160 kW) and a torque maximum 450 Nm.

The electric motor is powered by a 15.6 kWh lithium-ion battery, which can be charged in a 7.4 kW wallbox with alternating current (AC) in 1h45min. With direct current (DC), the battery can be charged from 10% to 80% in just 25 minutes. 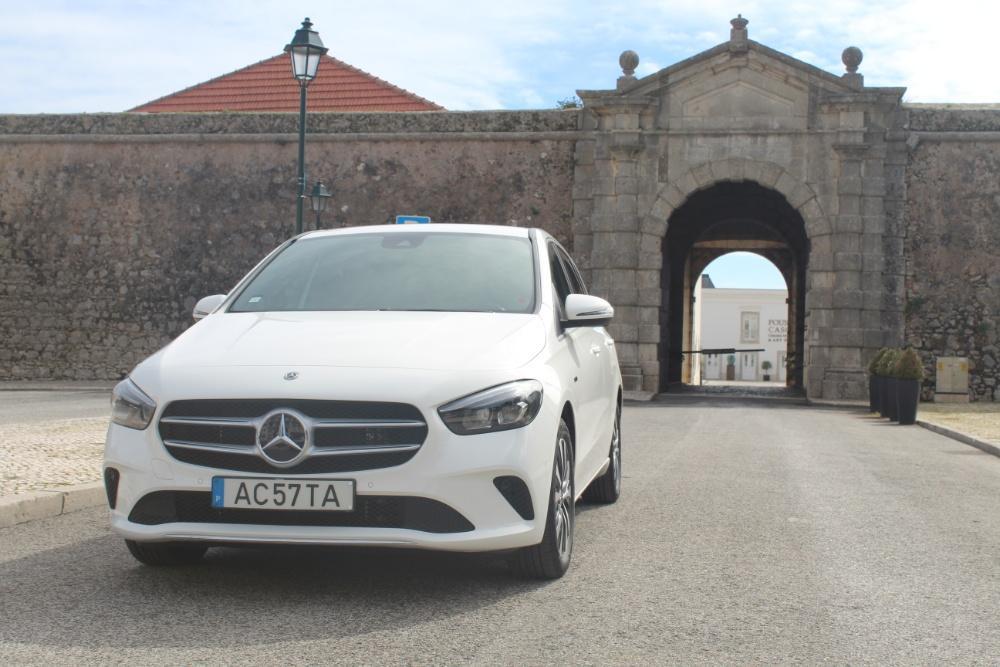 The battery allows a maximum autonomy announced in purely electric mode up to 67 km, in a WLTP cycle, although in the test performed we were slightly below, because it is good to remember that the autonomy Electricity always depends on the type of driving we do and the way we press the accelerator, being certain that in heavy traffic in big cities we get better performance.

In this way, it will not be surprising that at the end of a few days of use with commuting to work, passing through the school of the youngest and traveling to supermarkets, the consumption presented by the combustion engine was in the order of just over 2 liters at 100 km, despite the company announcing consumption combined between 1.4 and 1.6 liters at 100 km and emission between 33 and 34 g / km of CO2. 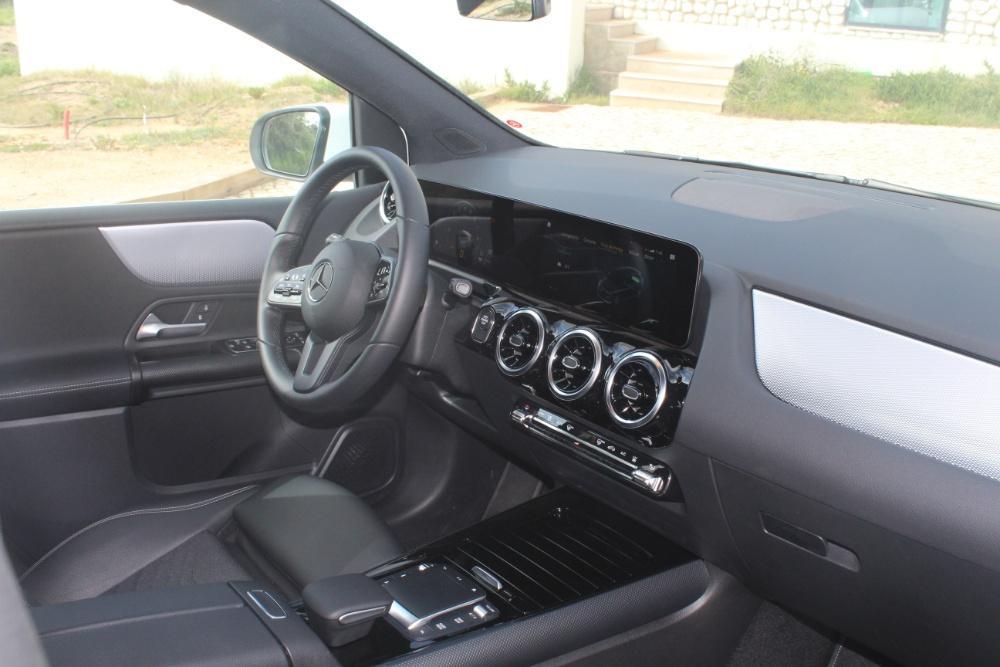 With the Mercedes Class B 250e engine presented, it is time to take the wheel of this plug-in hybrid model and soon we realize that when entering the cabin the highlight is the two huge screens where all the necessary information is concentrated, to which are added menus specific to this version, which allow information about the battery, recharge programs, efficiency of the electric motor, as well as other information.

Regarding of space, this electrified version is surprising since the passenger compartment does not present any type of limitation, when compared to the normal version. The battery is installed under the rear seats, which allows passengers to be seated in a slightly higher position, benefiting a lot of comfort.

The luggage compartment has a capacity of 405 liters that can reaching 1,440 liters with the rear seats folded, which allows us enough space for weekend trips, or even for more radical leisure adventures. 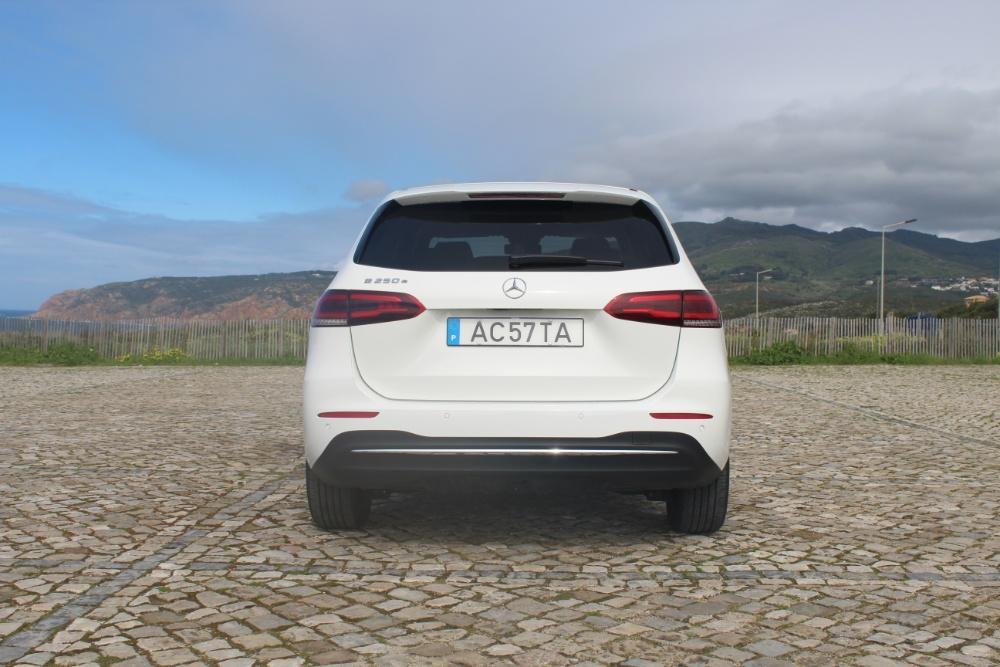 At the wheel, we soon realized that it is important to know how to take your foot off the accelerator and start braking early in order to allow maximum energy regeneration, in order to make the most of the electric motor’s time.

In addition, the steering wheel has two tabs that allow the regeneration capacity to be managed.

However, when we chose the Sport driving mode and started to press the accelerator more firmly, taking advantage of the 218 hp combined power of the Class B 250e, energy consumption skyrockets and gasoline surges. 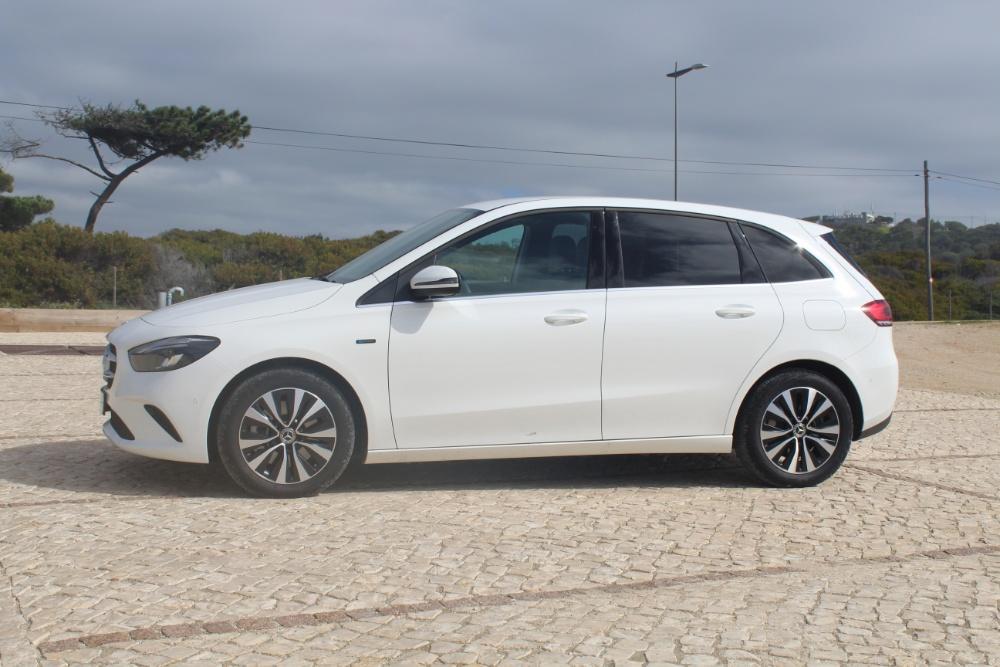 However, like most users of plug-in hybrid vehicles, Autoportal in this test also used mostly the Mercedes Class B 250e on urban routes and when traveling, mostly , never exceeding 50 km, which allowed us to enjoy this model in the ‘Comfort’, ‘Electric’ and ‘Battery Level’ driving modes.

With smooth driving, the Mercedes B-Class 250e benefits from an 8-speed DCT double-clutch automatic transmission, which has proved to be quite efficient, even when a brisk pace is imposed on winding roads, which does not jeopardize the comfort of the passenger compartment or the noise values ​​that inside this model they are quite small.

It is on the highway or in urban circuits, however, that we take advantage of the plug-in hybrid technology and the quality of this compact family that has the least positive price point, since the tested version has a cost of 43,999 euros.

Sandra Loyd
Sandra is the Reporter working for World Weekly News. She loves to learn about the latest news from all around the world and share it with our readers.
Previous articleTwo Latvian hockey players become Swiss vice-champions
Next articleAnupamaa PROMO: Vanraj and Anupamaa finally get DIVORCED; will Anupamaa begin a new journey now?