The VW ID 4 is the big brother of the ID 3, which is now very popular in Germany. We spent two weeks testing the fully electric SUV for its suitability for holidays and long journeys.

In the past few months, a lot has happened in the field of electromobility. While the market has long been dominated by small cars (Renault Zoe, BMW i3 etc.), expensive sedans (Tesla Model S) and premium SUVs (Mercedes-Benz EQC, Audi E-Tron etc.), there are now more and more electric cars that offer enough space for the whole family – and are also affordable.

These include, for example, the Kia E-Niro and the Skoda Enyaq iV. But another model can also be found more and more frequently on Germany’s roads: the VW ID 4.

If here from the “big twin brother” of the ID 3 is mentioned, then it is not just any empty phrase, it is meant in exactly the same way. If you take a seat behind the steering wheel of the ID 4, you can hardly see any difference to the ID 3. Yes, the display on the center console is slightly larger and of course the fully electric SUV offers significantly more space than the ID 3, but the two vehicles are essentially very similar.

Accordingly, the ID 4 leaves nothing to be desired in terms of equipment open: panoramic glass roof, trailer coupling (up to 750 kg unbraked and 1,000 kg braked), augmented reality head-up display, voice assistant, lane keeping and change assistant, automatic distance control, reversing camera, LED matrix headlights and much more – it there is almost nothing that (optional) does not exist.

This also applies to the subject of design. If you want, you can make the ID 4 more sober, more sporty or more progressive, both inside and out. In our test car, for example, black sports seats were combined with brown synthetic leather elements, which significantly enhances the interior of the vehicle compared to the standard. 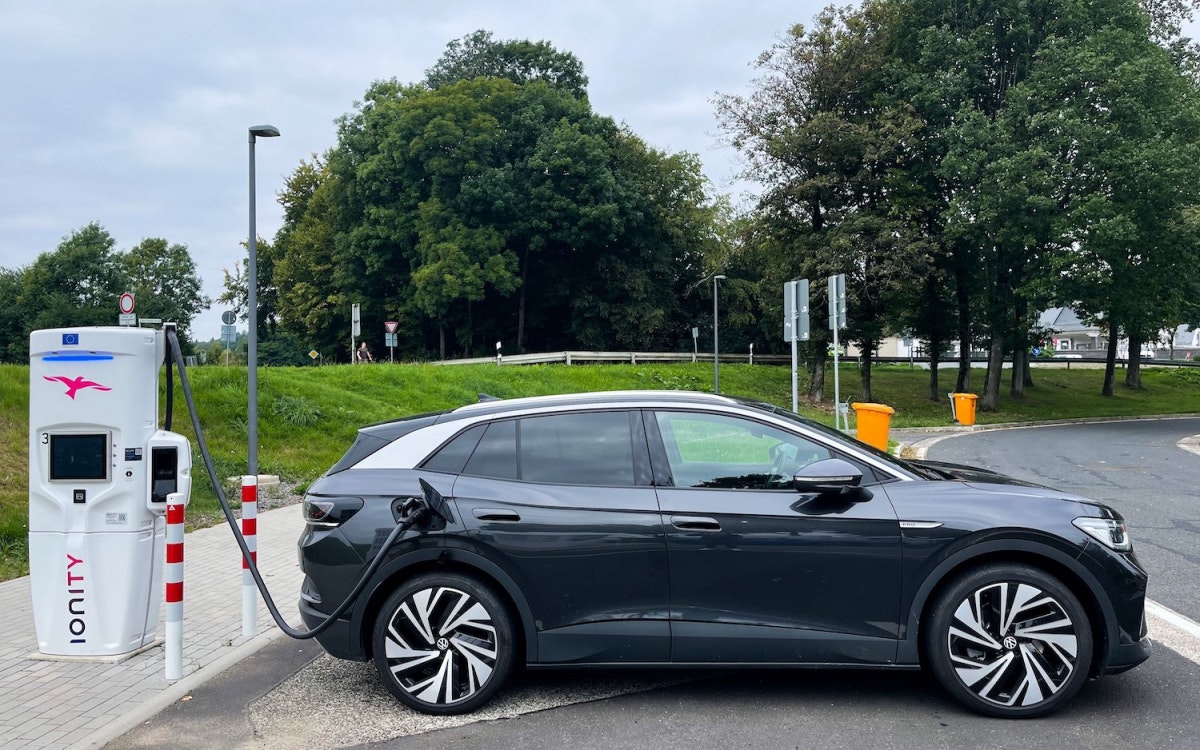 At the charging station, the VW ID 4 achieved a maximum of 131 kilowatts in our test. (Photo: Frank Feil)

And then of course there is the motorization or the battery. The ID 4 is currently available in three versions: Pure (52 kilowatt hour battery, 149 hp), Pro (77 kilowatt hour battery, 204 hp) and GTX (77 kilowatt hour battery, 299 hp, all-wheel drive). The respective target groups are clearly defined: The Pure model is aimed at drivers who want a lot of space but can do without a long range (350 kilometers according to the WLTP standard) in everyday life. The Pro version (520 kilometers according to the WLTP standard), on the other hand, is perfect for those who often drive longer distances. With the GTX, the focus is on sportiness: Despite the identical battery size, the range is reduced to 480 kilometers (WLTP) compared to the Pro version, but the GTX completes the sprint from 0 to 100 kilometers per hour in 6.2 seconds (instead of 8.5 Seconds).

After deduction of the subsidy, depending on the model variant and the selected special equipment, between 28,000 and 55,000 euros.

So much for theory. For practical use, we’ve come up with something very special this time with the ID 4 Pro: a classic vacation trip. Opponents of electromobility often argue that you can’t go on vacation with an electric car. The range is too small, the charging infrastructure is too poorly developed.

So we fully loaded the ID 4 and made our way to a holiday home on Sylt with four people. If you leave out the crossing from Niebüll to Westerland with the DB Autozug, the total distance from Stuttgart is around 900 kilometers.

It starts at 7 a.m. The day before, our photovoltaic system charged the battery to 100 percent. After 220 kilometers at 130 to 140 kilometers per hour, we use our first break to charge the ID 4 at Ionity for 15 minutes. According to the on-board computer, the average consumption on the first section of the route was 22 kilowatt hours per 100 kilometers. With four adults and a full trunk a first-class value. After almost 900 kilometers, the consumption of the fully loaded VW ID 4 leveled off at 21 kilowatt hours per 100 kilometers. (Photo: Frank Feil)

All in all, we took almost exactly three breaks of one hour and 15 minutes in just under ten hours by car. Nothing that we wouldn’t have done with a gasoline or diesel engine in the past. Of course, everyone knows the legendary stories of German diesel drivers who sometimes drive ten hours without a pee break for the family. But the majority of drivers still take several breaks on such a route, during which an electric car can charge in a relaxed manner.

By the way: The electricity for the 900 kilometers cost us around 38 euros.

“It’s really brave to drive to an island in an electric car! What do you do when you have nowhere to charge? ”A friend asked me before we left. This question shows quite well how many people have not dealt with electromobility in any way in recent years – and how all the myths and legends around the topic arise.

In fact, exactly the opposite was the case. Whether supermarkets, beaches, museums, restaurants or hotels – there were charging stations almost everywhere where we could charge the VW ID 4. Partly free of charge, partly subject to a charge. Especially when it comes to sights, the charging points were also the best possible parking space in the first row.

It is important to understand that, in contrast to the combustion engine, you never actively “drive to the store”, but always run it on the side – be it now while shopping in the supermarket or while strolling through the museum. 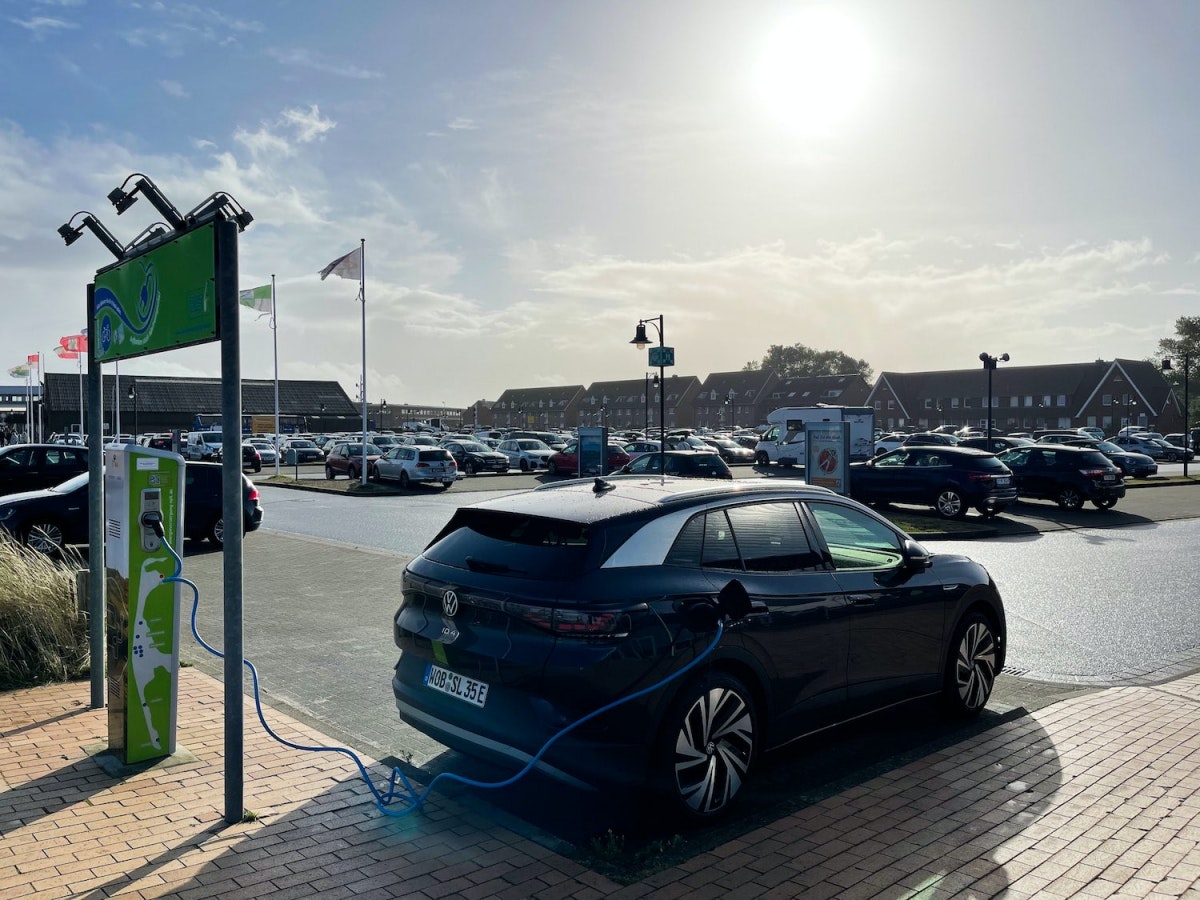 With the VW ID 4, a parking space in the first row was always guaranteed on Sylt. (Photo: Frank Feil)

Let’s get back to the VW ID 4. Overall, the fully electric SUV made a consistently good impression on everyone involved in our two-week test. In view of the external dimensions (4.58 meters by 1.85 meters by 1.64 meters), the space available is excellent, so that even four adults can easily make themselves comfortable in the ID 4 for several hours. The Wolfsburg-based driver also impresses when it comes to infotainment, driving comfort and assistance systems. The ID 4 can drive largely autonomously, especially on the autobahn, all you have to do is keep your hand on the steering wheel – as with all vehicles.

What can certainly be discussed is – as with the ID 3 – material quality in the interior. While the black, high-gloss surfaces and the hard plastic still fit into the picture in the inexpensive Pure version, it is difficult to accept the choice of materials in the Pro version with full equipment for over 50,000 euros. That is especially true of the fact that it – too as with the ID 3 – there are no dedicated buttons for the rear window lifters on the driver’s side. 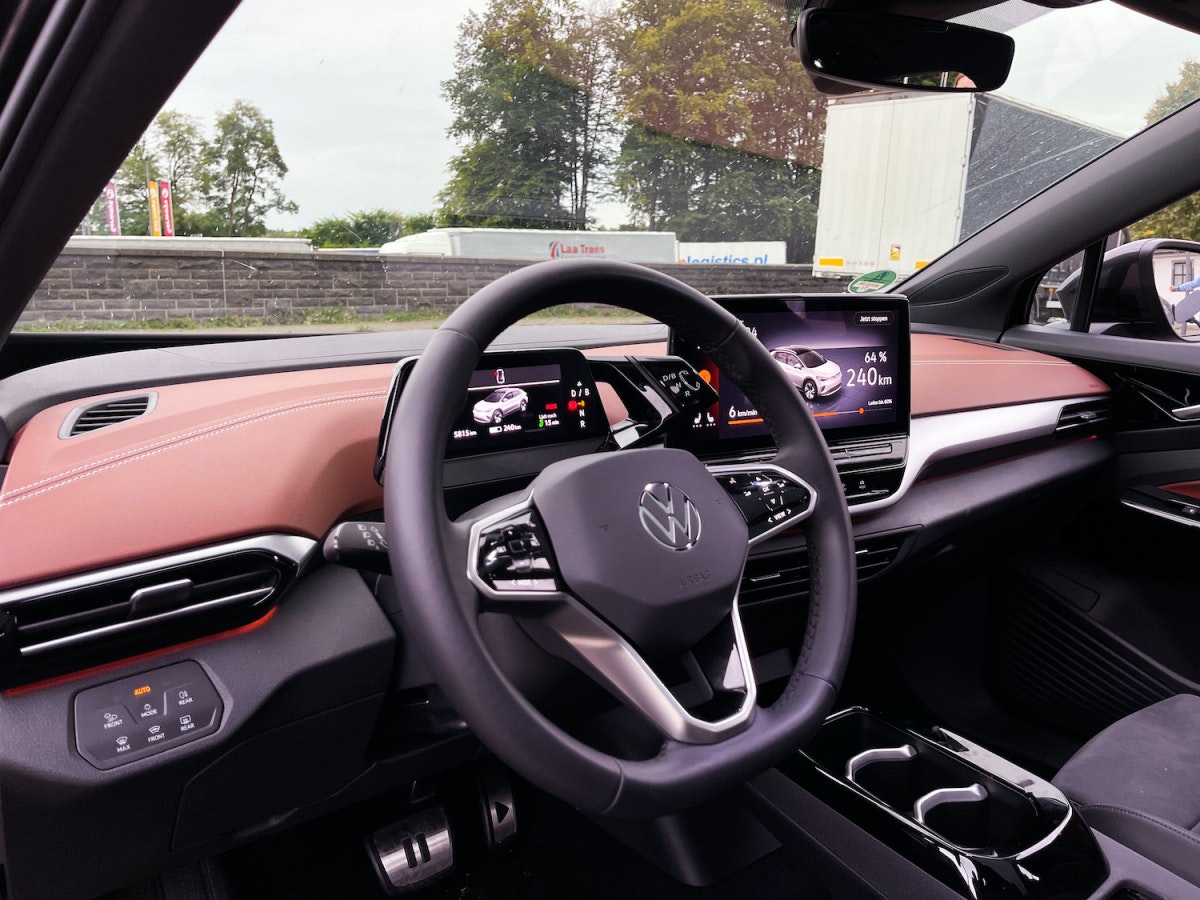 The VW ID 4 is an all-round Successful electric car, only with the choice of materials in the interior, the Wolfsburg-based company has done itself no favors with the many hard plastic surfaces. (Photo: Frank Feil)

Exactly here lies the difference to the Skoda Enyaq iV, which is based on the same platform: The VW ID 4 looks more progressive and tidier in many respects. The Enyaq iV, on the other hand, impresses with its significantly higher quality interior. In the end, it’s all a matter of taste, of course, but VW would have done well to give the fully electric SUV an at least optional higher-quality interior.

Apart from that, the VW ID 4 is an excellent electric car, both in terms of consumption and consumption As far as loading speed is concerned – and some premium manufacturers can also learn from the impressive augmented reality head-up display.

Derrick Santistevan
Derrick is the Researcher at World Weekly News. He tries to find the latest things going around in our world and share it with our readers.
Previous articleVideo: Accelerating too much on a paid unicycle goes awry
Next articlePixel 6 and 6 Pro in hands-on: This is how the new Google smartphones differ