World Weekly News
HomeTechnologyThrough catacombs and tunnels: In this adventure game you will learn common...
Technology

Through catacombs and tunnels: In this adventure game you will learn common command line commands

Many developers are uncomfortable with the command line, but it can be worthwhile. “Bashcrawl” sends you on an adventurous tour through tunnels and catacombs – you learn important commands as you go.

Budding developers cannot avoid the command line. For working with the Git version management system alone, it can be worthwhile to acquire a solid basic knowledge of common command line commands. And it’s also not a bad idea for everyone else to learn how to use the tool: The terminal opens up a number of options for adapting your operating system to your own needs. Some settings and functions can only be accessed via the terminal and are not available at all via the graphical interface. Other processes can be carried out faster via the command line than by clicking on the graphical user interface.

Don’t be afraid of the command line: With these 10 commands you can unleash it whole potential of your Mac

A great way to get to know common commands and their effects to memorize is to work with it a lot. Or to learn them in the game, more or less on the side. “Bashcrawl” was developed precisely for this purpose. After installation, the text-based adventure game puts you in unspecified catacombs through which you have to navigate successfully. It is dark in the individual rooms, in order to display the objects in them, you will be given a magic spell right at the start: ls . By interacting with the objects you will be taught important commands on the side – as long as you manage not to die. 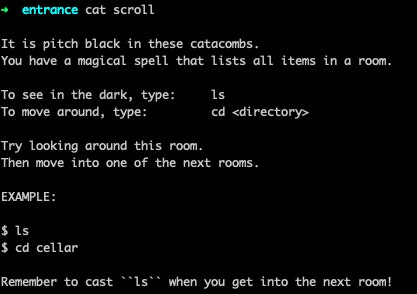 So the game starts (screenshot: t3n)

The game hits a similar notch as “The Commandline Murder Mystery, “is but probably more accessible for absolute newbies. Users of the social news platform Hacker News also drew parallels to a command line game on the Kano, a Raspberry PI-based computer kit for children. Mac users: inside there are a few things to consider during the installation, for Linux users: inside the setup is relatively straightforward: Simply open the terminal and drag and drop the downloaded file after entering the command CD followed by a space into the terminal window.

Sallie Anderson
Sallie works as the Writer at World Weekly News. She likes to write about the latest trends going on in our world and share it with our readers.
Previous articleHome office: Australian company wants to “rent space in people's homes”
Next articleShah Rukh Khan’s son Aryan Khan to spend next five days in jail as court reserves bail order for October 20