The best PC settings for Call of Duty: Warzone

With over a hundred players who would rather blow you to pieces now than a second later, Call of Duty: Warzone is one of the most competitive games of the moment. All the more important is optimizing your settings. After all, a few pixels or that one missed frame can make the difference between winning and losing. Curious about how to perform best in Warzone? These are the PC settings that can make all the difference in your session.
This article is a partner contribution from Asus ROG. You can read exactly what that means on our partner content page.
Our technical tips are for almost relevant to every type of PC player, but note that not all settings apply to everyone. With the arrival of Season 3, Call of Duty: Warzone now also supports Nvidia’s popular Deep Learning Super Sampling (DLSS) optimization, which is only accessible for RTX 20 and RTX 30 series graphics cards.

If you don’t have that hardware, don’t worry: there is always an extra frame to win. If you want to score an upgrade soon, we would like to tip you on a nice all-in-one product that can display Call of Duty: Warzone beautifully.

Brush up on Warzone performance in an instant Call of Duty is not averse to some ‘superfluous’ graphic additions. A low depth of field and a hint of motion blur looks cinematic, of course, but it adds zero to your actual performance. Gamers who have felt a competitive urge for some time now strip all these style elements straight from all their games. So it’s high time to sweep that same broom through Warzone.

Who wants to enjoy maximum sharpness and minimum fuss in Warzone, switch the following graphic settings down as far as possible. Whenever possible, ‘completely off’ is the best option.

Motion blur Film grain Filmic Strength Depth of Field
These style effects won’t have a huge impact on your hardware performance, but they will a neutral look at the game data. By minimizing blur and film noise, you brush your image pretty clean.

The following settings can also be turned as far as possible, this time having more impact on hardware performance and how Warzone initially looks.

Tesselation Texture resolutions Shadow map resolution Cached shadows
Detailed shadows and sharp textures are nice to finish a picture with, but they are rarely useful for competitive performance. Don’t worry: you can just leave the shadow of a player lurking around the corner. How much pixel precision your graphics card spends on that silhouette, that’s mostly the afterthought you want to minimize.
Same goes for anti-aliasing, the degree to which jagged lines are ‘softened’. Gamers with a powerful graphics card can let the Subpixel Morphological Anti-Aliasing (SMAA) go over the edges a few times. However, if you run out of frames for a smooth experience, disabling this feature can give you a nice performance bonus.

Apart from style elements and shadows, it is also important to ‘drain out’ Warzone in an optimal way. That depends somewhat on your setup, as well as your urge to share gameplay with the world.

If your setup has a single screen and you don’t plan to stream Warzone, then a exclusive fullscreen mode is the best output for you. A content creator will benefit more from the (borderless) windowed option, so that the system can switch more easily to recording software, possibly on a secondary monitor. Windowed games generally perform slightly less smoothly than they do fullscreen, but the difference is often minimal.
Regardless of resolution and urge to multitask, it is always wise to use the render resolution to the full hundred percent. After all, you prefer to fill every available pixel with relevant game data.
If your system encounters problems on your native resolution, then the size of the render can be scaled down if necessary. If you have a 4k screen, but if you want to use it to only 1440p, for example, then set the render resolution to 67 percent. 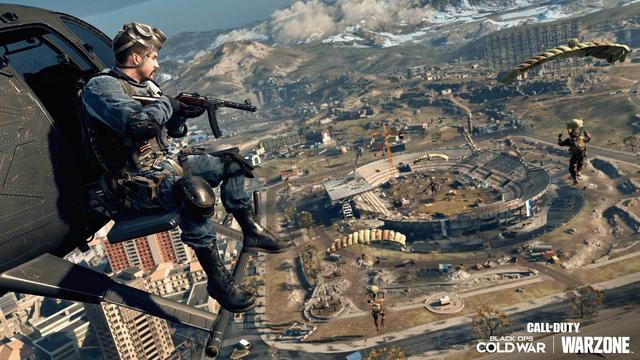 Smart upscaling with Nvidia RTX DLSS
The biggest bonus your achievements can score can be found in the DLSS support. Anyone who has an Nvidia GPU of the Turing or Ampere generation is stuck with this. The Tensor cores on the graphics card are used to significantly upscale your resolution, without having to manually calculate all those pixels. Such a piece of deep learning cannot but be encouraged.

Warzone currently offers four different DLSS profiles, each with slightly different tuning and optimization. Note that this upscaled performance is primarily intended for resolutions above 1080p. On an old-fashioned Full HD monitor, large parts of this technical advantage are lost.

Ultra Performance relies most heavily on upscaling and is mainly intended for resolutions (far) above 4k. Slightly lower is Performance, which is ideally suited for 4k screens. Balanced accurately balances performance and image quality, where Quality puts a little more emphasis on the sharpness of the whole. The latter two both lend themselves well to 1440p resolutions, while Balanced works best at frame rates of 144 fps and above.

If you still haven’t been able to enjoy DLSS, but hope to soon? Then a laptop like the stylish ROG Zephyrus G15 is ideally suited for sharp games at high frame rates. With a 165Hz fast 1440p display and an Nvidia GeForce RTX 30 GPU, you can handle demanding games, but you can also enjoy a game of Warzone on the go with that profitable upscaling.

Bring light to the dark

The recommended brightness of Warzone depends a lot on your personal preference, in addition to the brightness of your primary display. However, if you have the idea that dark regions are simply too dark for you, then you can increase the standard brightness from 50 to, for example 60 or 70.

If you shoot too far, light regions can be completely whitewashed, mainly the open air. It doesn’t look really cinematic, but if you enable to spot that guy in the dark stairwell faster, it’s a great exchange.

If you have a screen with exceptionally smart shadow optimization for games, you might want to rely on it. Many gaming and/or HDR displays come with decent shadow boost features, but the results vary widely. Choose the light (and especially the dark) that works best for you and your monitor.
How does Warzone sound at its best?

It won’t do your framerate much good, but Warzone’s audio can also be optimized. This remains dependent on taste, but those who want to achieve the best performance are probably best off with the Boost or Boost High sound profile. Both amplify crucial sound frequencies, which mainly include things like footsteps, shots and rumbles with weapons. Of course you want to hear it louder than, say, the whistling of the wind.

If your gaming headphones are already on a such a spatial awareness profile, the sound adjustments can overlap, to the point of exaggeration. If that bothers you, try experimenting alternately with how Warzone upgrades its own audio and how your headset does that. There is undoubtedly a setting in which you perceive the sound environment best.
Call of DPI: Warzone

Regardless of which DPI settings you prefer, it is important not to let Warzone mess with your mouse performance (too much). For your convenience, check whether Mouse Acceleration, Mouse Filtering and Mouse Smoothing are at their lowest and/or off. To the layman, these terms may sound desirable, but most gamers prefer their mouse behavior as neutral as possible. What you do with your arm, you also want to see directly in the game.

The Mouse Sensitivity is more tied to personal preference, and also of course the DPI where your mouse is running. It can be useful to experiment with different multiplication for example Aiming Down Sights (ADS) and vehicles, but who is the ratio 1: 1, in any case, don’t be surprised by sudden mouse accelerations. That is, as long as you don’t panic disproportionately in Warzone…

So far our series of tips for the best PC settings for Call of Duty: Warzone. Do you happen to have a clever optimization trick that could help your fellow gamer? Don’t be afraid to share this one, be it for brand new hardware or an older beast. The better we all perform together, the more fun Warzone becomes.

Want you can always carry that improved performance with you? Then consider a sturdy gaming laptop, like those in the ROG Strix line. Not only do these notebooks have mobile RTX 30 video cards, the displays also top off at 300 hertz image refreshment. With specs like that – and of course the tips above – Strix laptops lend themselves perfectly as mobile weapons for competitive Warzone fighters.

Adrian Ovalle
Adrian is working as the Editor at World Weekly News. He tries to provide our readers with the fastest news from all around the world before anywhere else.
Previous articleHuge fire engulfs Iran's largest logistics ship
Next articleAll blades from the world’s largest wind turbine manufacturer will be completely recyclable