IG Q&A: Will the next-gen version of Cyberpunk 2077 be late?

Blinken discusses with the Director of the Atomic Energy Agency, Iran's nuclear monitoring

Remember Article
On Friday there was another widespread failure of the Facebook services , Whatsapp and Instagram. This time it should have been due to a configuration error.

It’s not a good week for the Zuckerberg Group. For the second time within a few days, the company has to apologize for a far-reaching disruption.

On Friday evening, Facebook users reported, Whatsapp and Instagram again problems accessing the services. The malfunction lasted a total of two hours, which, according to Facebook, was due to an incorrect configuration change. The problem is said to have been noticeable worldwide, but unlike the first failure at the beginning of the week, it did not affect all users equally.

Disruption with a focus on the DACH region

The second failure is said to have occurred primarily in the German-speaking area. In addition, Instagram seemed to have been significantly more affected than Facebook and Whatsapp. At least that is what data from “allestören.de” shows. Up until a quarter to nine on Friday evening, only 1,000 users had problems with Facebook and Whatsapp, but 26,000 users had already reported problems with Instagram. 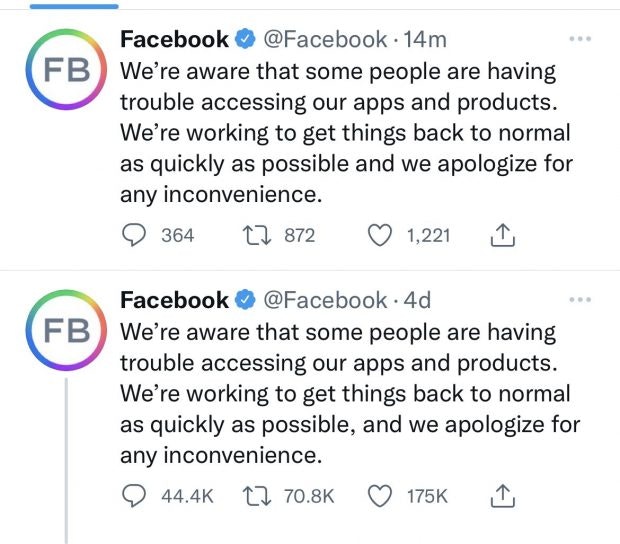 Identical except for a comma: also ordered corporate communications from Wish? (Screenshot: Twitter)

On Twitter, Facebook confirms another fault has not been well received. That was only partly due to the disturbance itself. The fact that the tweet that was posted apparently came about via copy and paste caused annoyance above all. He was verbatim to the tweet from Monday evening. Very attentive viewers noticed that the new tweet was different in one point. He was missing a comma …

Even after Facebook reported that they had eliminated all problems, users continued to complain of problems accessing services such as Instagram, Facebook Messenger and Workplace. Only in the course of Saturday night did the services become stable again.

Unlike the six-hour failure on Monday evening, the was due to an incorrectly set command and a software bug, a faulty configuration change is made responsible for the renewed failure. That leaves doubts about the competence of the technical staff of the largest website on earth?

Sandra Loyd
Sandra is the Reporter working for World Weekly News. She loves to learn about the latest news from all around the world and share it with our readers.
Previous articleSearch for extraterrestrial life: Former river delta on Mars could provide new clues
Next articleEXCLUSIVE: Sukhmani Sadana To Play The Main Lead In The Remake Of Fauda