The introduction to Ratchet & Clank: Rift Apart is one to remember. Your PlayStation 5 will be completely wrung out in a short period of time. The controller, the ray tracing, the SSD: no aspect remains unexploited. And the good news? It stays that way for almost the entire game.
Ratchet & Clank: Rift Apart is probably the most beautiful console game we’ve ever played. The lighting and HDR are phenomenal. The ray tracing, for example on Clank’s body or on smooth floors, steals the show in every screenshot taken. The funny and colorful house style is fantastic, thanks in part to the beautiful character models and almost Pixar-like animation. When all kinds of particles and other objects are flying around, the difference between this game and the older animation films is difficult to see.

How you experience those graphics is not only your screen. The game has two 60 fps modes: one with and one without ray tracing. Ratchet & Clank: Rift Apart is also playable at thirty frames per second, with the game running in 4k resolution and with all the bells and whistles turned on. Dips in the frame rate are not an issue in all views. We preferred to play in 60 fps mode with ray tracing.

But whichever mode you choose, Ratchet & Clank: Rift Apart knows how to impress graphically. And the game is a good showcase of the PlayStation 5 controller’s haptic triggers and rumble sensors. The use of the DualSense is reminiscent of Astro’s Playroom in almost everything. You can feel raindrops tapping in your hands and the bass of disco music rumbles through your controller. You keep bumping into new things that make inventive use of the DualSense. 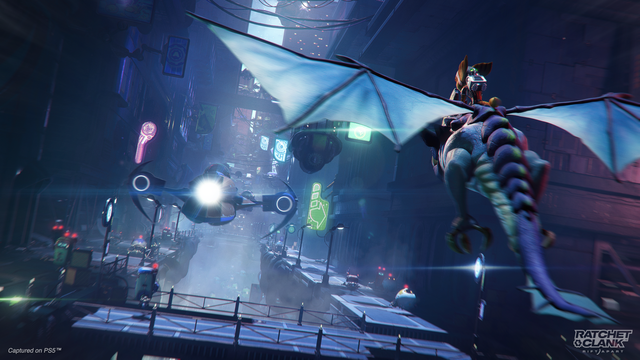 Rift Apart is also the first PlayStation 5 game to use the SSD as part of the gameplay. The game does much more with it than ‘put you nice and fast in the game world’. After all, the lightning-fast storage in the PlayStation makes it possible to alternate between different game worlds at a rapid pace. Developer Insomniac Games definitely delivers on that promise. As we know from the trailers, in this game you jump smoothly from dimension to dimension via purple portals.

That’s continuously impressive, but mind you, it certainly doesn’t happen continuously. Insomniac Games is quite reserved with this game mechanic. It seems that the developer wants to prevent the portals from feeling ‘gimmicky’. Traveling between dimensions is mainly discussed during chaotic moments. Those are often the moments when you expect such hectic pace. And that’s fine, because it never gets boring or annoying.

Switching between game worlds is nevertheless very central to the game. Almost all events in the story are caused by ‘colliding’ dimensions. That whole process is, of course, set in motion by the annoying villain Dr. Nefarious. He even ensures that you no longer only play with Ratchet and Clank, but also with fellow Rivet and his companion. Characters that are going to steal your heart a bit. 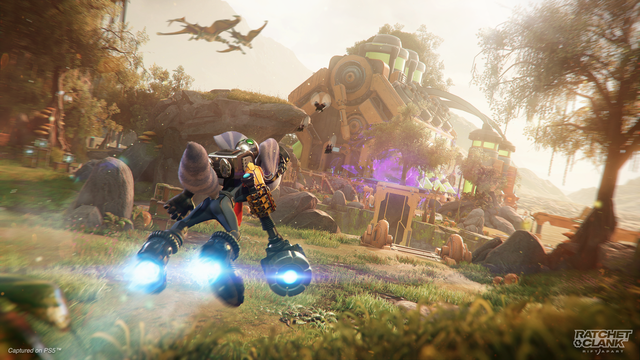 That does not alter the fact that Ratchet & Clank: Rift Apart ultimately tells a light-hearted story, and is not a great epic. The game plays with the idea of ​​dimensions, but don’t expect quantum physics in your action platformer. The game is clearly written so that children can understand everything. That’s not a criticism at all, but it’s something to consider if Rift Apart is your first Ratchet & Clank game. Then you can appreciate the scarce allusions to adults much better.

Speaking of other parts in the series: Rift Apart is a bit freer in design than predecessors. The game features a handful of colorful planets between which you must travel to complete missions and side missions. Some of those levels are relatively large, and in those levels it actually pays to explore every now and then. For example, almost all worlds contain smaller mini-levels (dimensional pockets), which can be accessed directly through the great SSD integration. That is very well done.

But you shouldn’t go too far in exploring, which we did initially. The outer edges of the levels are clearly not made to be explored as thoroughly as the ‘clearest’ path. Especially in game worlds where you ride a creature or vehicle, you quickly come across barren environments where there is little to gain. Fortunately, you notice less of that if you don’t have that perfectionist urge to explore. The game is fine to play linearly. Then you will only miss out on some items and experience points. 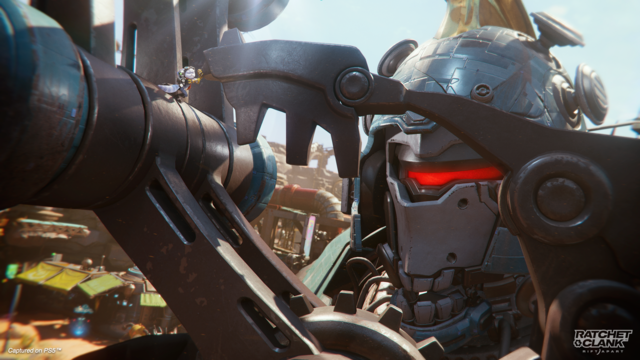 Ratchet & Clank: Rift Apart is otherwise very similar to the 2016 remake. The gameplay largely relies on the same pillars. Bit of fighting, bit of grinding on rails, bit of platforming. That doesn’t sound very exciting, but because of the decoration and the frantic pace, the gameplay is never boring. The game does its best to vary the regular fighting action. Every now and then you have to defeat viruses with a cute drone in mainframes and the planets burst from mini bosses.

Ultimately, it is the weapons from which the action derives its impetus. There is so much to choose from. Take the sniper rifle that slows down time or a drone that bombards enemies with clusters. Our personal favorites are the weapons you use to summon AI-controlled auxiliaries. If you use them all at once, you can create an impressive army of turrets, floating purple blobs and bumping green subjects in seconds. Because of all the violence on your screen you hardly see your enemies anymore. Apparently you can also play Ratchet & Clank as a kind of necromancer.
It’s a lot of fun to experiment with the weaponry, and it’s impressive how the game keeps introducing new interesting weapons . Sometimes, bored of two weapon wheels, the offer can even be a bit overwhelming. You should also keep in mind that you probably won’t unlock everything in your first play session. If you do want to do that, the ‘battle arena’ is the best way to collect everything. Oh, and another tip: Rift Apart is a fairly easy game. So if you have some experience with a controller, it’s best to go for the Hard difficulty.

If we have to make a rough estimate, because we didn’t clock exactly, it took us between 16 and 18 hours on that difficulty. In any case, the game is definitely much longer than the remake.

Ratchet & Clank: Rift Apart is not flawless . We were once stuck in the store menu and once behind our spacecraft. As a result, the game had to be restarted. We also couldn’t find the last enemy in an area twice, so we had to reload the save again. And then there are sporadic moments when enemies suddenly spawn in front of you or take crazy poses. They’re relatively minor bugs, but hey, they were there while reviewing.

Don’t interpret that criticism as fierce. The combination of splendor, the use of the SSD and the possibilities of the controller, makes this game completely unique. Even Astro’s Playroom didn’t feel quite as dedicated to the PlayStation 5 as Ratchet & Clank: Rift Apart. The gameplay is a bit less ambitious. You notice this especially when you are fighting long pieces in succession. Fortunately, it never takes long for the game to introduce variety. At some point, you’ll even unlock a set of rocket boots that will take you through environments at lightning speed.

Ratchet & Clank: Rift Apart is the game to show your friends what your new console is capable of . It’s nice that you also get a very good action platformer.

Adrian Ovalle
Adrian is working as the Editor at World Weekly News. He tries to provide our readers with the fastest news from all around the world before anywhere else.
Previous articleTouching photos.. Marib children in solidarity with Layan, the victim of the Houthi fuel massacre
Next articleOne of the world’s largest manufacturers says the global chip shortage could last until 2023