With a screen diagonal of more than eight meters, the new LG television transforms your living room into a cinema. Your wallet has to be just as huge.

LG has its new televisions with Direct View LED technology ( DVLED). They start at 108 inches (approx. 274 cm) screen diagonal and go up to 325 inches, which corresponds to 8.26 meters. The top model requires a huge living room with a stable wall and a considerable willingness to invest, because the giant display weighs a whopping 900 kilograms and costs 1.4 million euros, as Cnet asked LG. The follow-up costs are also enormous. The tip of the device draws more than 16 kilowatts of electricity from the line.

Despite its size, the 108-inch device only provides HD resolution, the 325- Zoller a whopping 8K. The reason for the relatively low resolutions for large diagonals is the technology used, which was originally developed for business use.

DVLED technology works differently than conventional LCD displays. With the latter, LCD levels are illuminated by individual LEDs; with DVLED, each pixel is represented by its own LED. Since the LEDs currently have a certain structural size, the dimensions of the end device must be based on this. This results in large diagonals even with low resolutions.

Streaming subscriptions in Germany: Netflix and the alternatives at a glance

The disadvantage is clear: The individual pixels are relatively large, which creates a grainy image and requires a large distance between the viewer and the device. Accordingly, the devices are not suitable for everyday use as TV after work. The advantage is that individual pixels can actually be switched off – because individual LEDs – so that a real black and thus significantly better contrasts are created.

LG positions the DVLED series primarily as a replacement for application purposes , where high-end projectors have been used up to now. LG can actually score points compared to these, because the DVLED technology also enables use in daylight and allows maximum brightness of up to 1,200 nits. 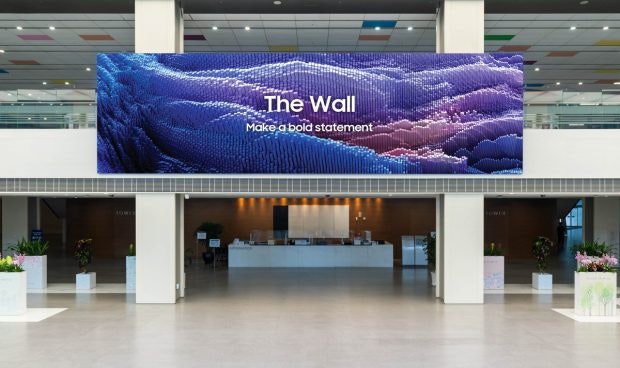 The next generation of “The Wall” can offer a diagonal of up to 1,000 inches. (Photo: Samsung)

Samsung’s “The Wall” or Sony’s Crystal LED series also work with individual LED pixels. Samsung presented the latest generation of its wall displays in July. There the technology is called Micro-LED instead of DVLED, but works in a similar way. Displays with a diagonal of up to 1,000 inches (approx. 25 meters) can be built using micro-LED modules. Even a “The Wall” with 100 inches (2.54 meters) costs around 150,000 euros. Samsung has not yet given any prices for the large installations. The manufacturer recommends its product for use as a trade fair wall or for other commercial needs – not as a living room TV.

The most important price factor for the technology is the size of the individual LED. Their miniaturization is advancing rapidly, but it is also keeping prices high. Samsung is now able to produce ads with a pixel pitch of 0.8 millimeters. LG communicates a value of 1.2 millimeters. The pixel pitch describes the distance from the center of the LED to the center of the LED and is a measurement factor for the empty area around the LED. In other words: the smaller the pixel pitch, the denser the image.

Adrian Ovalle
Adrian is working as the Editor at World Weekly News. He tries to provide our readers with the fastest news from all around the world before anywhere else.
Previous articleIkea goes Gaming: The collection will be released on October 1st
Next articleBTS: When Jimin was in tears and said his ‘voice was failing him’