On the way of Nightingale and Shadia.. Pictures of the wedding of the artist Mohamed Farraj

Samsung’s new Galaxy Book Pro 360 is extremely light for a 15.6-inch model and convinces in many respects. The convertible shows its strengths especially in combination with a Samsung smartphone – but it is not without weaknesses.

The Galaxy Book Pro 360 was presented in April together with the Galaxy Book Pro. Both models surprised with an extremely low weight, slim design and AMOLED display. But how does the convertible fare in the test?

Samsung’s convertible is only 14 millimeters thin and weighs just 1.39 kilograms. This makes the notebook with its 15.6-inch screen one of the lighter models in the device class. Microsoft’s 15-inch Surface Laptop 4 weighs around 1.5 kilograms, while Dell’s XPS 15 2-in-1 with a 15-inch screen weighs an impressive two kilograms. 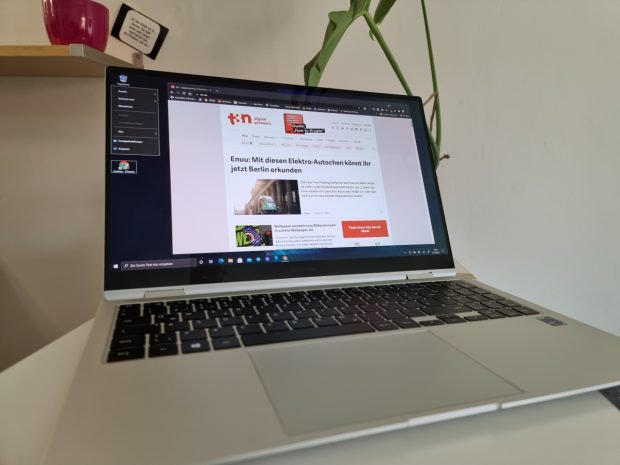 Despite its low weight, the Galaxy Book Pro 360 has a relatively stable aluminum housing that does not flex when held against a corner of the housing, which shows a certain robustness. When writing on the keyboard and working on the large trackpad, the keyboard frame flexes slightly, but this does not have a negative effect on use.

As usual for a convertible, the Galaxy Book Pro 360 can not only be used as a classic Notebook can be used, but also folded 360 degrees backwards as a tablet or in tent mode for presentations or for media consumption. The design of the silver model before us is quite simple and reserved. There is only a small Samsung logo on the display lid, which stands out from the rest of the matte case with its shimmering finish.

The frame and the touch -Display are rather narrow, with the lower side being relatively wide compared to the other three edges. The wider frame proves to be practical for use as a tablet. Also helpful: Samsung includes a stylus with its convertible that you can use to make sketches or notes on the device. However, there is no storage space for the S Pen in the device. Samsung had solved this better with its Flex model from 2020. At least the pen can be attached magnetically to the display lid. This solution is practical for carrying around from A to B in the home (office), but of course not for carrying it in a pocket. 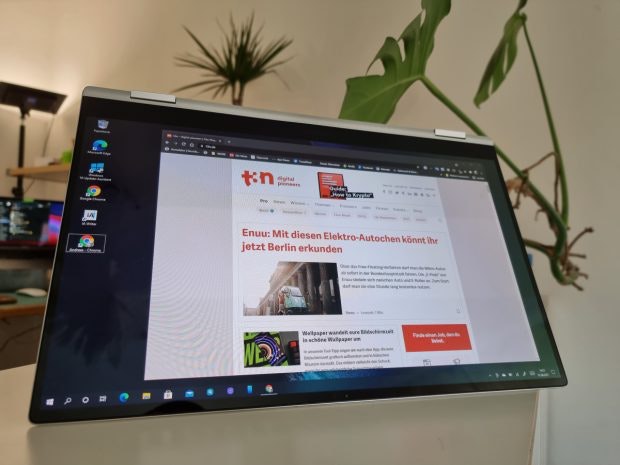 For the display of the Galaxy Book Pro 360, Samsung is using AMOLED technology for the first time, which the manufacturer has been using in its smartphones for years. The screen delivers correspondingly crisp colors and a deep black, and the viewing angle stability is also impressive. However, the panel is not particularly bright with around 300 nits – working on the balcony or in the café in sunlight is therefore not necessarily recommended.

Why Samsung also uses a 16: 9 aspect ratio while Many competitors use the more office-friendly 16:10 or 3: 2, which does not reveal themselves to us. Furthermore, the manufacturer could have opted for a higher resolution for the screen, because the 15.6-inch panel has a resolution of Full HD – 2K (1440p) would have made more sense for the size. Nevertheless: Individual pixels cannot be seen on the device with the naked eye, and the price should not be neglected. At 1,299 euros, the device costs far less than Dell’s XPS 15 2-in-1, which in its standard version only has a full HD panel.

With regard to the keyboard, Samsung has used the entire space of the 15.6 device and integrated a full keyboard including a number pad. The latter should be a selling point, especially for users who work a lot with Excel tables or numbers in general. The arrangement takes some getting used to, however, as the keyboard has been moved a bit to the left. So it can happen that you have to retrain the muscle memory of your hands at the beginning in order to blindly hit the right keys. Due to the small thickness of the notebook, the keys are also quite flat with a stroke of one millimeter, which shouldn’t be for everyone. 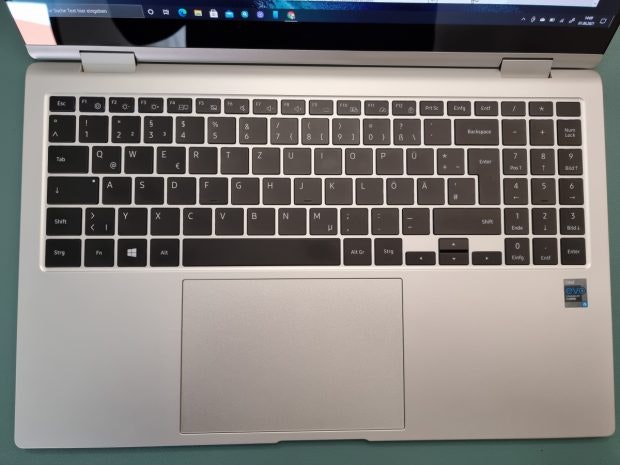 The highlight is the trackpad, which has massive dimensions for a Windows notebook and is reminiscent of a Macbook. It works as it should and recognizes all Windows 10 gestures without any problems. Other manufacturers of Windows notebooks could use Samsung as a model for the size of the touchpad.

Whom What is more convincing, however, is the audio output via the downward radiating loudspeakers. The sound is acceptable, but cannot compete with the excellent sound of the Razer Book 13 (test) or Apple’s Macbooks, whose speakers are located to the left and right of the keyboard and radiate upwards.

It looks similar with the webcam, which only allows 720p videos. The picture quality is correspondingly sobering, which is a shame, especially in times when video calls are part of the daily routine.

If the Integrated webcam and the sound do not have the highest priority, for example because you use an external webcam and always have headphones on, you get with the Galaxy Book A fairly high-performance device for the 360. Under the hood, depending on the version, there is an Intel Core i5 or i7 processor of the eleventh generation, which is supported by 8 to 16 gigabytes of RAM. With SSD storage you can choose between 256 and 512 gigabytes. Our test device with a Core i5, eight gigabytes of RAM and Intel’s Iris-Xe graphics delivers good results for office work and productivity; the device is not designed for highly demanding tasks. Nevertheless, you can edit pictures with the notebook and cut a video or play a game with less demanding graphics. Thanks to the Thunderbolt connection, there is the option of connecting an external graphics unit.

Where we would be with the connections: The Galaxy Book Pro 360 Pro has three USB-C ports on board, only one of which has the said Thunderbolt support. In addition, a micro SD card slot, Wi-Fi 6 and Bluetooth 5.1 are integrated.

According to Samsung, the 68 watt hour battery should provide 16 to 20 hours of energy for the notebook. Unfortunately, this is a little exaggerated – in everyday working life only around ten to twelve hours are possible, which are basically good values. The mobile computer can be quickly recharged using the 65 watt power supply included in the scope of delivery. 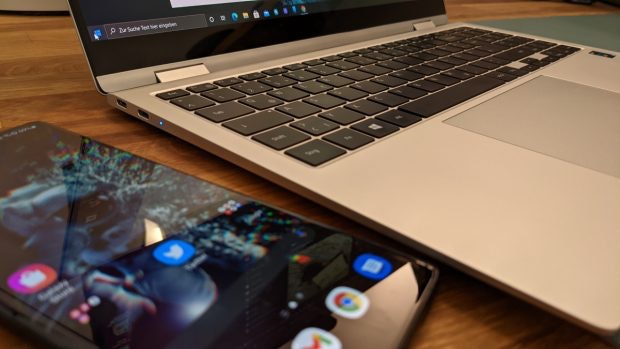 The Galaxy Book Pro 360 is equipped with Windows 10 Home and has many Samsung apps preinstalled, some of which overlap with Microsoft’s system apps. However, they hook into the manufacturer’s ecosystem and can synchronize across devices between other Samsung devices. For example, Samsung Notes, Link and Quick Share and other applications are on board with which you can share data across your devices or with third parties.

Furthermore, Samsung offers a second screen function, with which you can wirelessly use tablets of the Galaxy Tab 7 series as a second display connect to the notebook. The solution is reminiscent of Apple’s sidecar function, which the manufacturer introduced with macOS Catalina. However, due to the lack of a Samsung tablet, we couldn’t try this function. You can also couple compatible Galaxy smartphones with the Windows computer and move data back and forth directly using the Samsung Flow function.

Transfer from smartphone to notebook Samsung also has an elegant Bluetooth coupling function, with which, for example let the in-house Galaxy Buds connect. 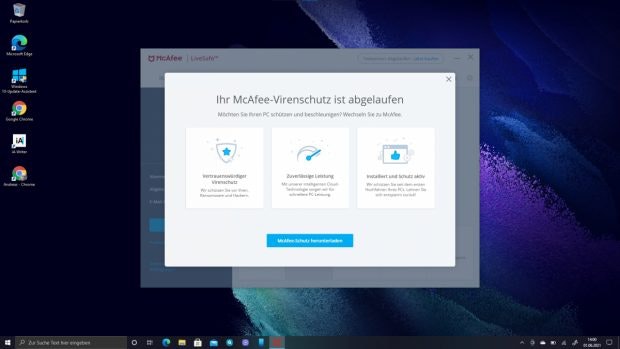 Although the computer is overloaded with Samsung software, some functions prove to be quite practical. What is annoying, however, is the pre-installed Mcaffee virus software, which sounded the alarm immediately after the computer was started for the first time, in order to be updated for a fee. It doesn’t have to be. 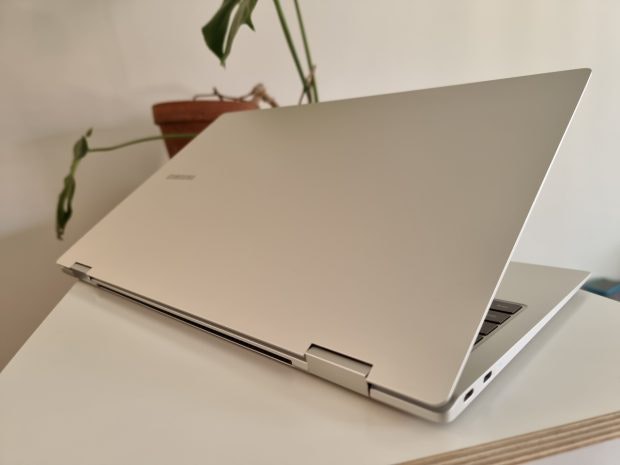 Despite some criticism, the Galaxy Book Pro 360 is a good 15-inch notebook in an extremely light and slim aluminum case that is also suitable for on the go. Sure: The AMOLED display is not the brightest, but it delivers crisp and vivid colors that make working and media consumption fun.

In terms of performance and running time, it achieves solid results. The notebook is not recommended for gamers because it only has an integrated Iris graphic. A plus point is the included stylus, with which you can either take notes on the notebook screen or your Galaxy Note 20 or S21 Ultra and then synchronize them using Samsung software.

The Galaxy Book Pro 360 fits seamlessly into the Samsung cosmos and should not only be a good choice for owners of a Galaxy smartphone who are looking for a light and good notebook. In the price class for 1,299 euros it has a lot to offer. With regard to the keyboard and the webcam, Samsung could do better with the next generation.

Models of the Galaxy Book Pro 360 at a glance:

Tyler Hromadka
Tyler is working as the Author at World Weekly News. He has a love for writing and have been writing for a few years now as a free-lancer.
Previous articleNew at t3n Pro: Daily briefing for our community
Next articleHow it all started: The websites of well-known startups in the timeline