Drama on the ISS: Russian module docks – and suddenly turns on

The Sudanese army denies the existence of a coup attempt

BTS: When Jimin was in tears and said his ‘voice was failing him’

The engines of the “Nauka” module ignited suddenly after the docking maneuver, but the nozzles of the ISS held against it. Nevertheless, the module turned the station. It had been noticed before through problems.

The Russian multi-purpose laboratory “Nauka” reached the space station at 2:30 pm (CET). After docking, the ISS crew started checking the interfaces for leaks. The team opened the hatch and connected the Nauka module computers. Suddenly the probe went into operation and started the engines. The ISS lost its position and in turn fired automatic corrective engines. The thrusts pressed against each other. Only the Russian space control on the ground succeeded in paralyzing Nauka’s drives. The crew was not injured during the maneuver, writes NASA in its message.

What caused the sudden start is not yet known. Experts suspect that the module did not recognize that the docking maneuver had already been completed. So it tried to make further flight corrections. Instead, it tilted the station’s attitude 45 degrees. Air traffic controllers stabilized the position by igniting the engines of the Russian Zvezda module and a docked Progress freighter. They managed to restore balance. The ISS has returned to its original orientation. Initial checks showed that neither crew members were injured nor equipment was damaged. Nasa announces that the people on the ISS were at no time in danger. 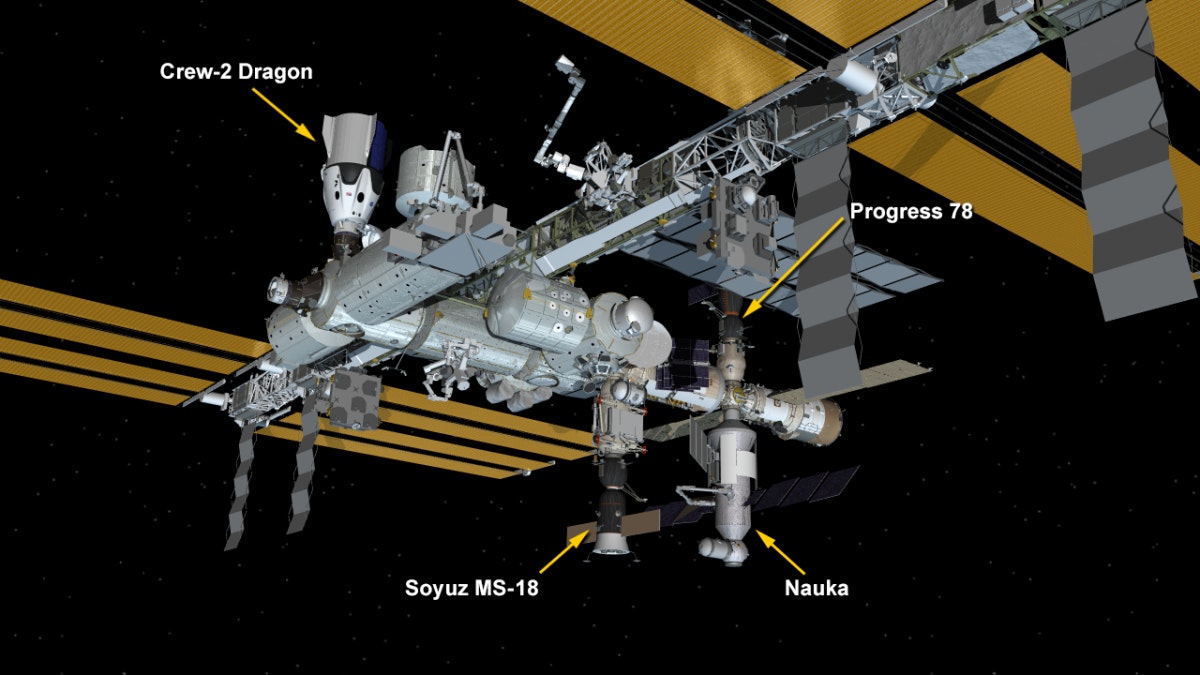 A 3D Model of the ISS with the modules involved. (Graphic: Nasa / JPL-Caltech)

NASA mission control has instructed the astronauts to look for broken debris. She has also entrusted the crew with rescue work on the module. Naucas tanks have half fill levels. This means that the module still has enough energy to start another unforeseen maneuver. Since no one knows how the sudden start came about, the astronauts proceed with all due caution. According to initial analyzes, debris does not seem to have come off. Due to the events, it is likely that those responsible will postpone the start of the Boeing Starliner to the ISS – the spaceship is to take off into the oribit tomorrow.

Even before the trip to the ISS, the project had fallen into disrepute. The module has been under construction since 1995 and criticism has been raised again and again. The technology of the research module was long out of date, it was said. The start to the ISS was delayed again and again. Originally, Nauka was supposed to be attached to the station in 2007, but that never happened. In April of this year the time had come. The trip was not a lucky star from the start. At first, the spaceship was unable to complete its initial ignition. A computer error prevented activation of the main engines. With the help of replacement engines, the module finally managed to reach the station. In addition, scientists at Nauka discovered problems with an antenna and the rendezvous course system. Docking with the ISS had to be postponed again and again. When it finally succeeded, three hours later the engines suddenly went into operation. Investigations into the incident are still ongoing.