Bitcoin completes consolidation as demand from holders and speculators increases

The bitcoin (BTC) market would be in the final phase of a consolidation process, while an increase in demand from speculative holders and traders could drive a bullish breakout in two weeks, says well-known analyst Willy Woo in his most recent market bulletin.

Although bitcoin was previously oversold, the consolidation process in recent weeks has been healthy , states the analysis. “In the meantime, we have detected significant whale activity, which suggests significant price action in the short term,” he says.

In the previous analysis, a maximum in levels had been highlighted. accumulation by long-term holders (LTH). In recent days, a decrease in BTC in the hands of this segment of holders has been detected, as can be seen in the following graph.

Historical data favor the thesis of the occurrence of a rally after the maximum accumulation occurs.

I keep watching this closely. Once the graph below exits the green zone or “accumulation peak”, historically a strong rally begins, but also the countdown to the end of that rally begins. When this happens, we will get clues about what may happen over the next 3-6 months. It is still too early to read, but there are strong indications that the macro environment for BTC is bullish for the next few months.

Bitcoin no is oversold and demand increases

While price action has held sideways, bitcoin demand has been growing, both by speculative traders and holders , says the analysis. “It is a very healthy outlook. If you remember, the price rose in anticipation of the launch of the bitcoin ETFs, which beat the trend set by the fundamentals, ”Woo notes. However, it clarifies that now investors have covered that gap, so bitcoin would no longer be oversold.

The NVT metric, which measures the volume of BTC traded in Relative to its market value, is one more example of how the market has “cooled down” , says Woo.

In the following graph It can be seen that the NVT signal is in the middle band, which would indicate that we are in a «non-superheated region», according to the analysis.

Rallies during bull markets generally start from this middle band. “Historically, we only fall below the mid-zone during market downturns; but there is little danger of this happening at this time, due to strong investor demand. ”

The trend of the outgoing flows of BTC from exchanges has been maintained, while the incoming flow to these of the stablecoin USDC has strengthened, according to the analysis.

This scenario, which was also present in Woo’s previous analysis, confirms the classic BTC buying pattern, asserts the study. The following graph shows another aspect of purchases by long-term holders: the heat map of bitcoin trading.

Red circles denote sales and blue circles indicate sales. Although they are not of great magnitude, blue circles predominate. 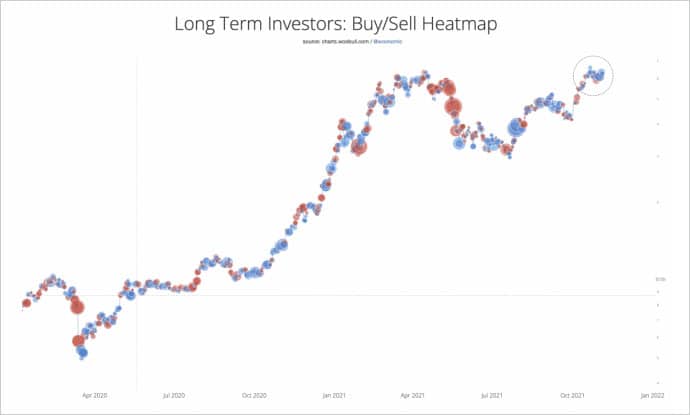 For the entire bullish scenario described, the analysis refers to some movements detected trading between bitcoin whales.

This graph shows recent movements of both buying and selling by whales, although purchases predominate. “I would describe this as a preparation of the whales for the times to come, this often happens before major movements in price,” the study highlights.

In coincidence with the upward trends mentioned in the study , BTC inventories from exchanges have continued their downward race since March 2020, as reported by CryptoNews. From 3.14 million BTC, the balance has fallen by 22% in 19 months, and is at the same level of August 2018.

On the other hand, a study by Glassnode, commented on the past November 3 hereby states that the market is going through a moderate profit-taking phase, which has historically preceded a bullish breakout. 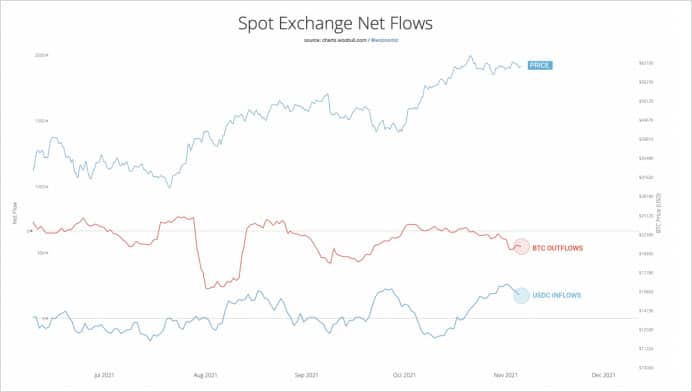 Sandra Loyd
Sandra is the Reporter working for World Weekly News. She loves to learn about the latest news from all around the world and share it with our readers.
Previous articleThe United States passes law for public spending of more than 1 trillion dollars
Next articleIT executives have said the hybrid workforce is here and will remain here

You will save videos of Messi in your portfolio: the NFTs change the way you see sport

Manchester City, from the NFT to be the first in football to reach the metaverse