Samsung: Galaxy-Unpacked now in the live stream and all information about the event

As more and more ATMs are taken out of service due to lower usage, the Bitcoin machine industry is flourishing. There is currently strong growth in new machines.

The mass adoption of cryptocurrencies continues to take shape worldwide. While the Bitcoin exchange rate broke through 50,000 US dollars at noon today, despite the current nervousness of shareholders, the Bitcoin infrastructure is being expanded further.

According to Finbold, 13,242 Bitcoin ATMs have already been installed in the first three quarters of 2021. When looking at the individual quarters, it is also noticeable that, viewed individually, growth can be seen in each quarter. In the first quarter 4,033 Bitcoin ATMs were installed, afterwards the citizens were happy about 4,430 ATMs in the second and 4,779 in the third quarter.

North America is the clear pioneer in Bitcoin ATMs

The distribution of Bitcoin machines worldwide, however, is everything else as balanced. While there are 26,489 machines available in North America, the rest of the world with 1,840 machines only represents a tiny fraction of the total.

The number of Bitcoin ATMs divided by continent / source: Finbold

The spread of Bitcoin machines makes it easier to make payments in Bitcoin. In addition, the cryptocurrency sector is also becoming much more present to the general public. Bank ATMs, on the other hand, have been on the decline for years.

Due to the unclear regulations in the crypto sector, the number of Bitcoin machines is still extremely small compared to traditional bank ATMs. Nevertheless, the growth has increased enormously over the years. 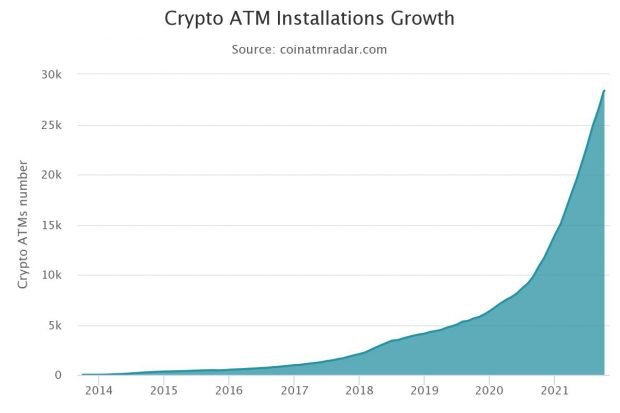 The situation in El Salvador is particularly interesting at the moment. In El Salvador, the construction of Bitcoin ATMs is currently in full swing. Remember the words of President Nayib Bukele, who named as a great motivation the aspect that around 70 percent of their own population did not have a bank account.

Even before the Central American country has built a comprehensive banking infrastructure, the Cryptocurrency sector subsidized. Bukele hopes that Bitcoin as legal tender will bring greater prosperity in the country. At the beginning, all residents who downloaded the Chivo wallet received BTC worth around 30 US dollars – a welcome gift from the government.

According to Bukele, over two million people are already using the Chivo wallet. If the statements are correct, then the Chivo wallet would already have more users than any bank in the country.

It can be said that the number of Bitcoin ATMs is continuously increasing. The development here corresponds to a classic innovation curve in which growth increases sharply after reaching a critical amount. However, as the total number increases, so does the concentration of existing machines. The two North American states, the USA and Canada, form the center of the Bitcoin ATM business.

Sallie Anderson
Sallie works as the Writer at World Weekly News. She likes to write about the latest trends going on in our world and share it with our readers.
Previous articleLike giant inkjet printers: at BMW, robots now paint cars with pinpoint accuracy
Next articlePixel 6 and 6 Pro: Google's new top smartphones come on October 19th