In the absence of Dončič and Porziņģis, “Mavs” loses “Grizzlies”, Hārdavejs most productive game of the season (VIDEO)

Hackers, blackmailers, whistleblowers: this employee from Hell is a real nuisance

The new Apple Watch Series 7 only brings moderate innovations – one that is important in everyday life is the support for fast charging. This means that the watch can be brought from zero to 80 percent in 45 minutes.

It is one of the few improvements that the Apple Watch range can offer in version 7. With a new quick charge function, the Series 7 should be charged 33 percent faster than the previous version. The manufacturer had promised this during its “California Streaming” event last month.

With the improved function, the battery level of the Apple Watch Series 7 should increase from zero to 80 percent in three quarters of an hour, like a shows support document posted on Friday. That also answers a few other questions about the new function.

As has been the case for several generations, Apple does not include a charger with the Series 7. Users have to buy this separately. Existing power supplies from the Californian manufacturer can be used as long as they have an output in the USB-C standard. The following power supplies are then suitable: Apple 18W, 20W, 29W, 30W, 61W, 87W or 96W power adapter. So if you have a current iPhone or iPad, you should have already bought one of these power supplies. 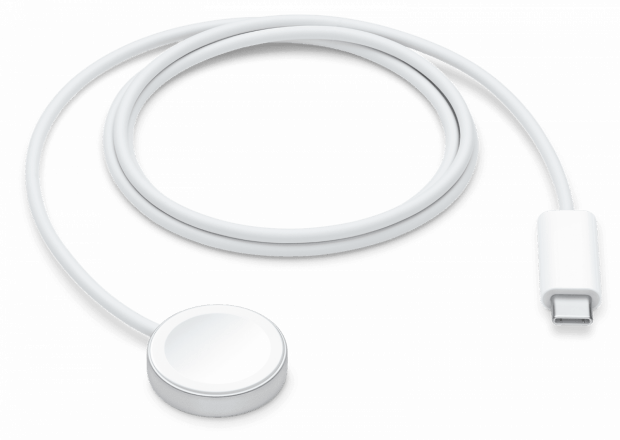 This is the new charging cable for the Apple Watch. (Image: Apple)

If you want something cheaper, you can use any other power supply with a USB-C output. The only requirement is that it is based on the Power Delivery standard, which is the case with practically all third-party power supplies that are not made for special devices, such as Oneplus smartphones. Apple specifies a minimum power of five watts, which is required for rapid charging of the Series 7.

In the scope of delivery of the Series 7 and incidentally also the Apple Watch SE, which remains in the program, is the new “magnetic quick charger on USB-C Cable “with the part designation A2515. The new charging puck with a one meter long connection cable can also be purchased separately for 35 euros.

Charging puck is suitable for all watches, but only charges Series 7 quickly

The difference to the previous charging puck is that it has a USB-C – instead of a USB-A connector. In addition, the magnet holder is not made of plastic, but of aluminum. The new puck is still backwards compatible up to the first Apple Watch. However, only the Apple Watch Series 7 is charged quickly, because only it has the required electronic charging counterpart in the watch. All other watches are loaded with the previously known speed.

Apple has not made any changes to the dimensions, so that the new puck still fits into every docking station on the market into which the circular charging device can be pressed. Apple’s The MagSafe Duo charging station, available for 149 euros , does not support fast charging any more than the previous charging cables – regardless of your performance used power supply.