France plays and wins the UEFA League of Nations trophy

A research team from the University of Manchester makes a sweaty suggestion: Human colonies on Mars could be built with the blood of the people who build them.

There is no water on Mars, just a lot of dusty soil, which is scientifically correct called regolith. These are not good prerequisites for building necessary structures for any human colonies. For example, if you wanted to fly bricks from Earth to Mars, it would cost an estimated two million US dollars per brick.

Now British scientists believe and Scientists have found a solution to the serious problem of bringing building materials to Mars. On the one hand, the already mentioned regolith, which is in abundance, plays a key role. The other important elements are human blood and urine.

Martian concrete could arise from blood and dust

The team exhibits in a work that was published in the science journal Materials Today Bio Manchester proposed a concrete-like substance called “Astrocrete”. The name is a mixture of Astro (n), the ancient Greek word for star, and Concrete, the English word for concrete. The researchers mixed this star concrete from synthetic regolith (because there is currently no real Mars regolith on earth), human blood and urine.

The functional principle results largely from the human serum albumin. Albumin consists of almost 600 different amino acids and is found in the plasma of human blood. The protein coagulates when moisture is removed from it, creating a strong binding agent. When mixed with regolith, a solid, concrete-like compound comes out as soon as the albumin has dried.

With urine it becomes even more solid

How the researchers came up with the idea of ​​adding human urine to the experimental set-up is unclear. In any case, it was found that adding urea (urea) increases the stability of the Astrocrete by 300 percent. The result was a slushy brown piece of Astrocrete. The team promises that the mass can be brought into any shape and even used for 3D printing. 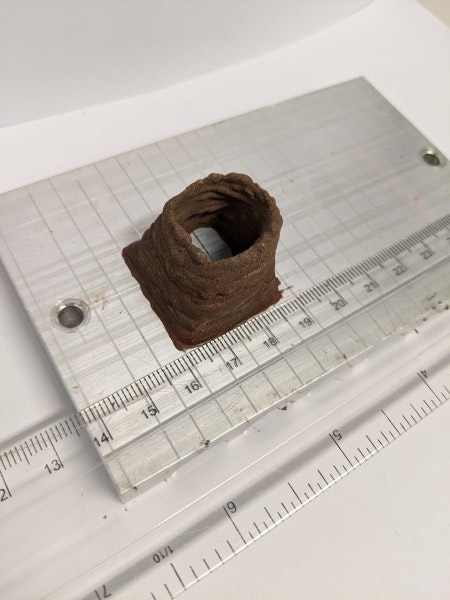 This is what Mars concrete looks like. (Photo: University of Manchester)

The scientists see the purpose of building an outer skin, the The aim is to protect the people who colonize Mars from the planet’s radiation and the severe dust storms that frequently occur on it. The researchers have not described what the mass might smell like after drying. Anyone who has to go through underpasses on their way to work can certainly imagine the smell.

The idea behind Astrocrete is not new. Rather, it is said that early Chinese and Roman builders used ox and pig blood to consolidate the mortar from which they built their settlements. Accordingly, study director Dr. Aled Roberts: “It is exciting that one of the greatest challenges of the space age could have found its solution based on inspiration from medieval technology”.

Roberts emphasizes that the use of animal albumin would certainly produce the same results. But initially there would be neither cows nor other farm animals on Mars.

The scientists expect that over 500 kilograms of high-strength Martian concrete could be produced by a crew of six astronauts in the course of a two-year mission on the surface of Mars. In view of the fact that one cubic meter of concrete weighs between 2,000 and 2,500 kilograms, it would take many years to build even the smallest of settlements in this way.

In any case, research must now be carried out into how the then quite considerable amounts of blood could be drawn in a way that is harmless to the Martian settlers. Further investigations are to take place.

Sallie Anderson
Sallie works as the Writer at World Weekly News. She likes to write about the latest trends going on in our world and share it with our readers.
Previous articleF1: there is already a draft of the calendar for 2022 and Portugal is not included
Next articleStudy: Bitcoin generates as much e-waste as the Netherlands annually