The two-time Lithuanian champion is attracted to the Cavaliers

Remember Article
According to calculations of the platform Crypto.com, the estimated global crypto population doubled within six months and reached 221 million users in June.

Crypto.com presented a new report on Thursday that shows how the number of crypto users is developing worldwide and – correspondingly – which assets are driving growth. The analysis is based on a combination of on-chain data from Bitcoin and Ethereum, survey analysis and internal data from Crypto.com, according to the company. The report also takes into account the data from 24 crypto platforms.

Doubling of the number of users in half a year

The analysts at Crypto.com emphasize that their new methodology enables a more precise estimate than before, but is still subject to numerous restrictions and reservations. That said, the report makes interesting statements.

The number of active users of crypto assets worldwide has increased from 106 million in the January 2021 more than doubled to 221 million in June. In the period from April to June alone, the number rose by 79 million. This growth can be described as rapid. In comparison, it took nine months to go from 65 million to 100 million. 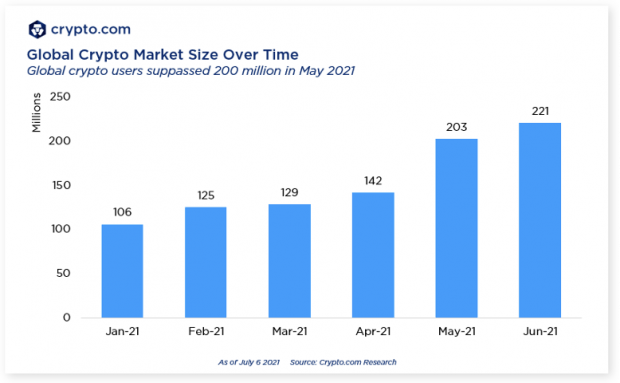 While Bitcoin fueled growth in January and February, from May the so-called Altcoins will become the new growth drivers. While Bitcoin and Ethereum together held a stable 80 percent of the market at the beginning of the year, their combined share fell to 61 percent in June. Meanwhile, Altcoins were able to increase their share in the same period from 20 to 38 percent.

“New challengers such as proof-of-stake protocols and Meme tokens showed great potential in May, especially after bitcoin mining became more of a focus, “the report says. 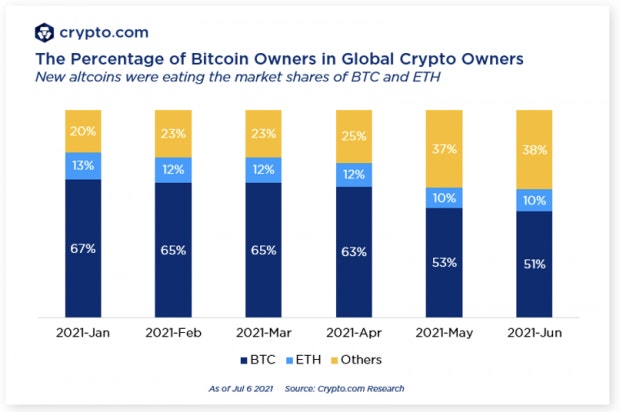 Crypto.com in line with Cambridge researchers

The report is in line with the findings of the researchers at the Cambridge Center for Alternative Finance. Less than a year ago, they discovered that the number of crypto users is growing exponentially. At that time, 101 million people around the world were using crypto assets. And that was a massive increase over the 35 million that the same researchers had identified just two years earlier.

The full report is available as PDF for download.

Derrick Santistevan
Derrick is the Researcher at World Weekly News. He tries to find the latest things going around in our world and share it with our readers.
Previous articleShin Megami Tensei V's story trailer now available with official Spanish subtitles
Next articleShares 10 percent down: Robinhood trading app disappoints on stock market debut